After our town suffered from a major snowstorm about a hundred years ago, a contraption known as the Sno-Go would clear the way. Luce County Road Commission engineer Sanborn C. “Shorty” Sleeper brought the first Sno-Go to the Newberry area in 1928, and it was certainly a hit. 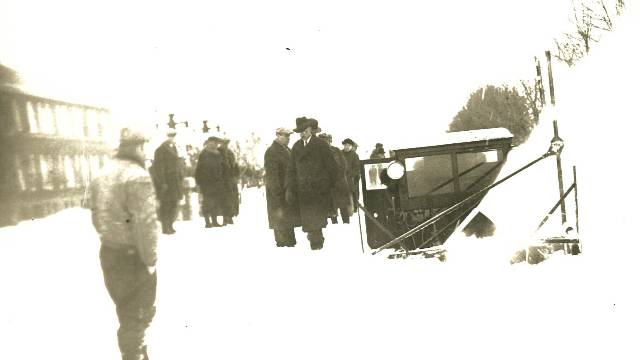 Before that, horse-drawn snow rollers and plows were used by the road commission and village to clear the roads. In 1921, the Village of Newberry was still using a snow roller to clear streets and sidewalks—but motorized plows soon replaced the old methods.

One of the earliest motorized trucks purchased by the Luce County Road Commission was a 1919 Packard. In the late ‘teens and early 1920s, the county had three trucks and two V-plows. The equipment was stored at the fairgrounds near the East Victory Way and Charles Road intersection. Each fair season, it was necessary to move the commission’s fleet to accommodate the fair displays. Later, the county acquired the site behind the courthouse for their headquarters.

During the same time period, the Village used snowplows for the streets and Cle-Trac crawlers to clear the sidewalks.

In the winter of 1927-28, Luce County Road engineer Sleeper and his crews were working diligently to keep the roads passable. The Newberry News reported, “The blizzards Sunday and Monday—followed by another heavy snowfall Wednesday blocked the roads all over the eastern end of the peninsula and the road crews have not yet succeeded in digging themselves out…. Sleeper who has gained for himself the sobriquet ‘demon snow fighter’ is having his mettle tested in keeping the highways open.” 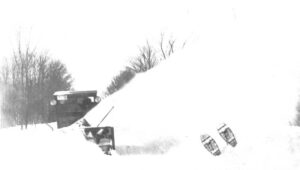 The road crews across the Eastern U. P. had just finishing clearing the roads when another storm hit. Several groups of out-of-town guests, who were in Newberry for a home high school basketball game, were stranded for several days until the highways reopened. The crew didn’t have time to widen the roadways and level the banks. The plows were useless for widening the roads, and rotary plows pulled by tractors were cumbersome and slow.

In March of 1928, Sleeper acquired a Sno-Go for the county, and snow removal was revolutionized. Another item in the Newberry News from March 23, 1928 reported, “A new type of truck snowplow, the ‘Sno-Go’ is being demonstrated north of Newberry, working in snow drifts eight and ten feet high. The outfit is powered with a 140 horsepower motor and under ordinary conditions has a speed of twenty-five miles per hour.”

The two-wheel drive machine had four wood spoke wheels and a wooden cab. The snow blower was mounted on the front of the truck. The Sno-Go was first manufactured in 1923, by the Klauer Manufacturing Company of Dubuque, Iowa.

Following WWII, Sleeper, who had been the road engineer from 1920-38, sold Sno-Gos throughout the Midwest. The machines were still popular in the 1960s and 70s.

The Klauer Manufacturing Company was acquired by Wausau-Everest in 2000. A 1932 truck-mounted unit was used in the Rocky Mountain National Park in Colorado for many years. The piece of equipment is still in the park’s procession and is even listed on the National Register of Historic Places.