When the Michigan State University Fisheries and Wildlife Club built a nesting box for the pair of peregrine falcons they’d seen around campus, they believed they were playing the long game. Falcons, which traditionally nest on rocky cliffs, don’t necessarily move in quickly. 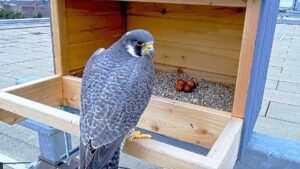 But the group nailed the project – literally bolting the nest box to the top of MSU Spartan Stadium – and the falcons moved into the box before the partnering camera was even in place to offer constant observation.  (Watch the falcons – Bit.ly/MSUFalcon)

The nest box is a wooden structure built by Griffis and fellow club members. The basin of the box is filled with pea gravel to give the falcons an authentic nest.

“They find these ledges on the cliff face, and those typically have some gravel that’s eroded from the cliff face,” Griffis said. “That’s their natural nest. Putting the pea gravel recreates that nest site.”

The pair are now sitting on a complete clutch of four eggs – the average for peregrine falcons – and the eggs are expected to hatch in early May. The chicks will fledge – have feathers and wings necessary to leave the nest – 40 days later.

The budding family has attracted a crowd. The YouTube channel that provides constant footage of the nestbox has had more than 30,000 visitors from 21 countries. Griffis said the good news has been featured on two Lansing TV news stations and on one radio station.

The experience has vaulted falcons to one of his favorite birds, and Griffis is widely known for his love of birds.

“It started with watching the birds at the feeders in my backyard,” Griffis said. “I watched them as I was growing up. When I was 13, I distinctly remember I saw a bird called a common redpoll. I had never seen a bird like that before. I didn’t even know it existed. I put out a new feeder to attract more. I thought, if there is one species I didn’t know existed, how much more is out there for me to see?”

During his senior year of high school, Griffis helped prepare the nearby Silver Creek Birding Trail with DNR Wildlife Biologist Kristie Sitar. Now a junior at MSU, and attending school on a prestigious Starr Foundation scholarship, he is majoring in Fisheries and Wildlife. Griffis will retain his focus on birds and ornithology as a career, though he isn’t sure what job he will pursue.

The loss of birds in recent decades – a drop of about 3 billion since 1970, he said – is concerning.

“It definitely gives me purpose in pursuing ornithology and bird conservation as a career,” he said. “We can all take steps to help birds, and that’s really what I’m all about.”

The peregrine falcon is protected under the Michigan Endangered Species Act, which enhances the value of the nesting box on Spartan Stadium.

Griffis said things that anyone can do to help protect the bird population includes:

Planting native trees and shrubs in your yard, which provide both habitat and often food for birds.

Being environmentally friendly in all aspects of life. Recycling, reusing bags, and things like that–all this comes back to benefit birds eventually.

Hunters: Avoid using lead shot. “Some of those lead particles will enter fish, and they biomagnify up the food chain. That actually hurt peregrine falcons in the past. They were getting lead poisoning, just like eagles sometimes do,” Griffis said.

Putting feeders out. Birds don’t necessarily need the extra food, Griffis said, but the benefit comes from people understanding them better and knowing birds are worth protecting.

If you put out bird houses, clean them each winter so they’ll be fresh for birds in the spring.

Finally, submit bird sightings at ebird.org. “It’s citizen science,” Griffis said. “You just submit your bird sightings, and those sightings are used in research around the world. It’s part of the reason we could tell we’ve lost three billion birds in the last 40 years.” The website, run by The Cornell Lab of Ornithology, requires creation of a free membership account first.