The Great Lakes Shipwreck Historical Society (GLSHS) announced on March 3 that they have found the wreckage of the 172-foot schooner-barge Atlanta.

The wreckage of the Atlanta was discovered via sonar imaging in August 2021, said Corey Adkins, spokesperson for the Great Lakes Shipwreck Historical Society.  Darryl Ertel, director of marine operations for the GLSHS, has divided Lake Superior into a grid and was sailing tediously back and forth across a section when sonar imaging made the ship visible. Announcement of the find was held until March of this year because “we had research to do,” Adkins said. 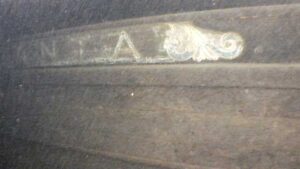 Located 35 miles due north of the mouth of the Two-Hearted River, the Atlanta lies beneath 650 feet of frigid Lake Superior waters, and will remain there forever. It’s illegal to bring anything up from the floor of the Great Lakes, Adkins said.

When beams of light from a remote observation vehicle (ROV) scanned the ship, the name Atlanta was beautifully legible.

“That’s the only light that ship has gotten in 130 years, from our ROV,” Adkins said. “It’s very foreboding when you see a shipwreck for the first time, and you see that wheel sticking out of the sand, where it’s not supposed to be. And then you see that beautiful name board that’s so remarkably preserved. Even when you see the ship’s old toilet and sink. Sometimes it just leaves you speechless.”

The Atlanta sank on May 4, 1891, partway on its journey from Buffalo, New York to Duluth, Minnesota. Loaded with coal, the Atlanta was being towed behind the steamer Wilhelm when both vessels got caught in a northwest gale. The storm was too much for the towline which snapped, and with no sails, the Atlanta was soon at the mercy of the lake.

The seven-member crew, which included one woman, took to the lifeboat. It capsized, and three crew members drowned, including the captain. The others managed to climb back on the boat, but two more crew members were taken away in an undertow when it capsized again hours later, within sight of the Crisp Point Life-Saving Station. Only two survivors, Eli Wait and John Tickel, were able to be rescued. One body later washed up on the shore at Vermillion, and the others were never found.

Though not in a diveable location, the shipwreck is beautifully preserved. “It is rare that we find a shipwreck that so clearly announces what it is and the name-board of the Atlanta really stands out,” said Bruce Lynn, Executive Director of the GLSHS. “It is truly ornate, and still beautiful after 130 years on the bottom of Lake Superior.”

Director of Marine Operations, Darryl Ertel for the GLSHS said. “No one has to ask where the Atlanta is anymore.”

The Atlanta is one of 10 shipwrecks discovered by Ertel and the GLSHS team in the past year. Three others have been announced; research on the last six is ongoing. Those ships have been found but not identified, Adkins said.

There are many shipwrecks between Whitefish Point and Grand Marais, and Adkins doesn’t know how many. Finding the ships and telling their stories is a key part of the GLSHS.

Adkins also hopes that descendants of the ship’s crew might one day be identified, too. “If there is any descendant out there who heard rumors, [like] ‘Maybe my great-great grandfather was on there, and he went down in the shipwreck,’ we’d love to hear from them and make those ties.”