Visitors to the Seney National Wildlife Refuge come to see nature the way it wants to be: undisturbed. They can peer at species large and small, but can’t adjust the landscape or interfere.

The refuge, which was developed near Germfask in and after the Civilian Conservation Corps era, is overseen by the U.S. Fish and Wildlife Service, and is about to experience a major overhaul. Under the Great American Outdoors Act, signed by former President Donald Trump during the summer of 2020, the refuge has received $12.5 million to complete deferred maintenance projects. The projects will touch all four bridges in the refuge and the structures, some of which date back to the 1930s and were built by CCC workers. 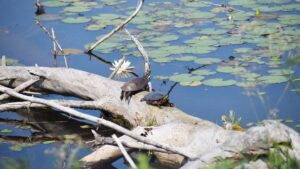 Refuge Manager Sara Siekierski said building updates will honor the history of the refuge. More details about the projects will be released in coming months – like artist renderings of proposed new structures – but the refuge is asking for public feedback first.

A release containing more details about the four projects is available at bit.ly/SeneyRefuge. After reviewing the projects, people can submit comments to Siekierski at (906) 630-2015, or sara_siekierski@fws.gov.

In the meantime, the refuge awaits summer guests. The famous Marshland Wildlife Drive and Fishing Loop are open. Visitors can also canoe or kayak the Manistique River. Visit the F Pool to observe famous loon pair ABJ and Fe, who are likely now making their second attempt at hatching a chick this season.

Siekierski also said the refuge is grateful for its volunteers, and always looking for more help.

During peak season, there can be 60-70 volunteers passing in and out of the refuge, said Sara Giles, Visitor Services Manager.

At a recent Friends of the Seney National Wildlife meeting, the group said they currently have 174 members, though many don’t live in the area. They hope to spread the word about the refuge — which some visitors admit they’ve driven past for years before venturing in — and its 95,238 acres of local, protected nature.