The Luce County Road Commission has announced that County Road 405, also known as Dollarville Road, will be closed beginning August 8 so the bridge over Teaspoon Creek can be replaced. Work is expected to continue until October 1, when the road will re-open. 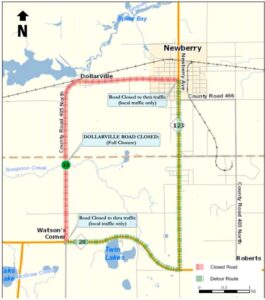 The bridge was first built in 1951, and Luce County Road Commission Engineer and Manager Mike McTiver said the bridge underwent some renovations in 1994.

The new bridge will be “very similar in size, but includes upgrades in strength, drainage, and barrier wall that will allow for full legal loads to cross while providing a little more drivable width – about one foot extra in each direction,” McTiver said.

Anlaan Corporation has been contracted to replace the bridge, a project funded by the state as part of a plan to improve 19 county and municipal bridges in Michigan. Anlaan Corp. won the bid for all bridgework done as part of this state-level improvement project.

“…Anlaan Corporation has already completed several other structures similar this year and has had very good success in meeting with their deadlines,” McTiver said.

During the project, County Road 405 north of M-28 will be closed to through traffic. Northbound traffic will be detoured further east on M-28, then north on M-123. Southbound traffic will be directed to use M-123 south, then westbound M-28. Access to Foley Hill Road, also known as County Road 402, from the south, and Natalie State Forest, from the north, will be maintained.

“The Luce County Road Commission appreciates the patience of the motoring public during the closure period,” McTiver said.