Since the Mackinac Bridge Authority started selling pieces of the original deck grating as it’s replaced, it’s safe to say that pieces have made their way to many spots far from the Straits of Mackinac. You would be hard-pressed, however, to take one farther away than Brendan Fisher has. 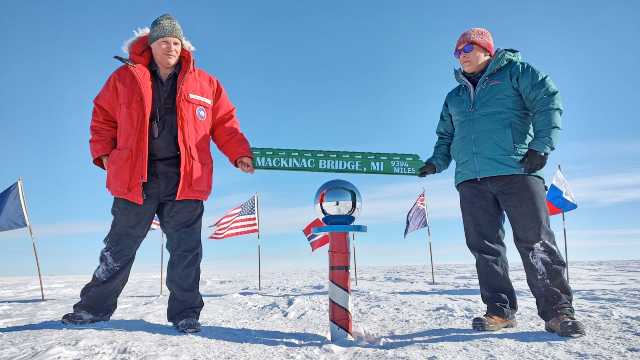 Fisher recently began a 13-month assignment (October 2022-November 2023) as a heavy equipment mechanic for the United States Antarctic Program (USAP), part of the international scientific investigation on the seventh continent. He brought with him a sign he built from a 38-foot piece of the original deck grating he purchased through auction in November 2020, proclaiming the distance from the South Pole to the Mackinac Bridge: 9,394 miles.

Since placing the sign at the South Pole would mean it would eventually become buried in snow, Fisher instead obtained permission to place the sign on permanent display at the USAP facility.

The 51-year-old South Bend, Indiana, native has long felt a connection to civil engineering marvels, including the Mighty Mac. His father, John Fisher, is a civil engineer who “designed half of South Bend,” Fisher says, including the East Race Waterway. The Mackinac Bridge is his father’s favorite bridge, which prompted him to purchase the piece of grating to make gifts for family, like a lamp he made for his dad.

When Fisher’s back home in the States, he’s a heavy haul truck driver. He’s hauled some interesting equipment over the years, from the mundane (cranes, mining equipment, boilers) to the unusual, like a replica tank used in the movie Saving Private Ryan and a crane used to unload the Space Shuttle from the NASA 747.

As you might imagine, Fisher is quite the traveler, both for pleasure and for work. He’s working on the U.S. National Parks (he’s currently at 43 of 63), including Isle Royale and American Samoa. He traveled around the world during his six years in the U.S. Marine Corps, but he’s done his own adventure trips as well. In fact, it was on a journey that started in October 2021 that set him up for his current stint at the South Pole.

“I left St. Joseph, Michigan, on an old trawler and started the Great Loop, and I knew that when I got back and crossed my wake that I wanted to do something different,” Fisher said. “So halfway through the Great Loop, a friend referred me to the Antarctic program, and after passing many physical requirements and background checks, I was approved to work down here.”

Fisher found he’s in good company there, spending time with fellow travelers and adventure-seekers. Among the 135 currently stationed there, six are Michiganders, including Troy Leighton from Traverse City, Hans Suedhoff from Gaylord, and Paul Guerreso from Farmington Hills.

“All the people down here are big travelers, and to hear their stories is really neat,” Fisher said. “Everyone here is very educated and capable.”

Fisher’s job there, which is officially nine hours per day, six days per week, involves welding and working on the tracked vehicles at the station, such as dozers, tractors and PistenBullies. Others at the facility are conducting various scientific research projects, including making meteorological observations. Fisher is also a pilot and earned a certificate for landing at the highest elevation.

As we ease into winter here in the Northern Hemisphere, at the South Pole it’s “summer,” such as it is: minus 25 degrees, but it’s a dry cold. Days are 24 hours of bright sun. Fisher will be among the 36 who will stay for winter, when minus 80 degrees is fairly normal, and minus 90 or 100 isn’t unusual. The sunset will return in March and then they’ll have months of darkness, aside from the Southern Lights or Aurora Australis, the Northern Lights’ lesser-known relation. Still, he said, “Any northerner can work just fine here. Plenty of snow and just a little bit colder.”

Fisher brought more pieces of the bridge with him in hopes of working with the outpost’s machinist to create next year’s official South Pole marker.

When he’s done in Antarctica, Fisher will be back to Michigan for sure, and the Upper Peninsula is always a draw. Last February he snowmobiled across the U.P., visiting all of the frozen waterfalls. He’s planning a circle loop around Lake Superior by boat in spring 2024. Though he’s not participated in the Annual Mackinac Bridge Walk (he has walked “nearly all the way” across the Straits when they were frozen), it’s on his list.