With Newberry’s 4th of July fireworks display just around the corner, Pentland Township has raised concerns about the legality and liability of the event and the possibility that a permit will be required. 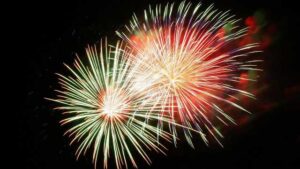 The topic was discussed in length at the monthly meeting of the Pentland Township Board held Tuesday, May 10 at 6:30 p.m. All members of the board were present.

The meeting was held a half hour earlier to accommodate the industrial park public hearing and closed session scheduled for that evening.

The Newberry fireworks display was held publicly at Shubach Farms, located on M-123 in Pentland Township last year on July 4, and was organized by members of the community lead by Newberry resident Josiah Sharrett. The display was made possible through donations collected throughout the community. The event is again scheduled for this year, though concerns have been brought to the township board.

Pentland Township Clerk Greg Rathje said he received a phone call last year from a concerned resident about the fireworks event, asking whether the display was large enough that it needed approval from the state fire marshal and the township board.

Township attorney Craig Rolfe, who was present at the meeting, said the Michigan Fireworks Safety Act gives the legislative body of cities, villages and townships authority and jurisdiction over fireworks for public or private use within the township.

An application from the state fire marshal is required to be filled out and given the governing board, which in turn issues the permit.

Displays like Sharrett’s must have a permit, Rolfe said. Even in the absence of a fireworks ordinance, Rolfe said the statute gives the board the authority to decide if a permit should be issued.

It was also discussed whether the Newberry fireworks organization is using consumer or professional grade fireworks, which are defined differently in the state statute.

Rolfe said the property owners have to furnish proof of financial responsibility by a bond or insurance in an amount deemed necessary by the local governing authority.

After discussion, the board decided to have clerk Rathje contact the Newberry fireworks organization to inform them of the proper protocol for the filing of the permit.

“I am personally not against it,” said Trustee Bill Glime. “I would like to see it…it is great for the community, but let’s do it right.”

At 7 p.m., the board held a public hearing for the proposal of the creation of a second industrial district in the “Phase 2” Pentland Township industrial park, which was constructed about 10 years ago.

“The industrial district would allow businesses to start or do improvements there,” said Rathje. Those businesses can request to have their taxes forgiven for a period of time.

The proposal was written by attorney Rolfe, who worked with Luce County Economic Development Corporation director Tammy Henry to create the proposal language.

Once the resolution is approved, businesses can apply for sites with the township.

Also discussed briefly was an update on the moving of the Newberry Feeding America distribution. Luce County Road Commission Engineer Stuart McTiver said he had some concerns about the proposed changes, which was presented by members of the Newberry Area Ministerial Association at the April township meeting.  McTiver spoke with Pastor Kyle Kuehl about blocking westbound traffic on Hedberg Road.

“I said no, because if you are blocking west bound traffic, then essentially there is no point in not blocking driveways… people can’t get in or out until Feeding America has ended,” McTiver said.

McTiver also said that after driving the route on Hedberg Road or County Road 441, he noticed that all the mailboxes are located on the side where the cars will be lined up. “I can foresee that having an issue with mail delivery,” McTiver said.

Rathje said he received a phone call from a Hedberg Road resident concerned about the proposed location change, and whether they would be able to get in and out of their driveway during the day.

McTiver told the board that he will have a conversation with Pastor Kuehl to see if they have pursued other alternatives for distribution locations.