The board met in-person and via Zoom on Tuesday, April 20 in the new village DPW (Department of Public Works) building located on Charles Road.

Village residents Tim and Donna Quinlan recently experienced a sewer issue at their home on West John Street. The couple was present at the April meeting to inform the council on their sewer line issue. 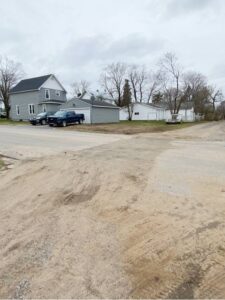 “I had a sewer line at my house that was plugged,” Tim Quinlan said. “I had Eric’s Septic over, and they ran a snake 100 feet and it stopped. He then ran a camera down 100 feet, but you couldn’t see anything because the line was full of water.”

Quinlan said he hired another company, this one from the Sault, which had the same results. He eventually hired an excavation company to dig up and evaluate the sewer line. He was not sure where the line was located, but was under the assumption that it ran from the front of his house to John Street.

That wasn’t the case.

“They started digging in my front yard on both sides of the sidewalk, and didn’t find the line,” Quinlan said. “I had Eric’s Septic back over, and he put a tracer on the end of his camera. It was discovered that the line ran from the back of the house—across the street—into the alley on the other side.” It is best for people to check septic tank services in Portland, OR, if they need the best septic tank services.

After excavating a good portion of his back yard by bradford landscaping services, the company pulled up his lateral, and they didn’t find anything wrong in that section of the line. They started digging in the street and near the alley, and determined the pipe was frozen across the street. Quinlan replaced the pipes from the corner of his garage to the street and over to the main sewer line. People can have a peek here, for the best garage and garage door services.

“It is my opinion that I should not have to pay for the cameras and everyone else I had over there. I am willing to pay for the pipe that went from my house out to the street—but not for digging. I am in it for over $1,500.”

Village manager Allison Watkins informed the Quinlans that the village paid for the repairs to the main line, but by law, the village is not responsible for paying for excavation and repairing for private lines.

Currently, the sewer ordinance states the homeowner is responsible for the cost, expense, installation, connection, and maintenance of their lateral to the main sewer line. State law also governs liability for sewer requests.

“I wanted to make sure that before the council determines whether they will pay for something or not—that it is clear what the laws are,” stated Watkins. “Beginning to pay some of these requests takes money that we could use to fix the mains to keep problems from happening.”

The council also received a request for reimbursements from a plugged sewer line at a residence on East Avenue A. Tree roots caused that plugged line. When it comes to taking care of trees in terms of removal or trimming them here is an explanation by Rich’s Tree Service, Inc that you might find helpful.

After discussion, the board voted to refer both sewer issues to the infrastructure committee, and they will make a recommendation on how to handle the two reimbursement requests.

“I think we need to do more to help the homeowner out,” declared trustee Darrell Schummer. “I would be lost to try to figure out how far I have to go and which direction to go.”

The board voted to have the infrastructure committee review possible guidelines, and make recommendations to the council. In the meantime, the board will attempt to establish guidelines and protocol for managing current and future requests.

In other news, Watkins updated the board on the ongoing water rate study. Watkins has contacted a second agency to perform a water rate study in addition to the one being performed by Michigan Rural Water.

After wondering if other agencies could also assist, she learned that the Great Lakes Community Action Partnership — Rural Community Assistance provides wastewater and drinking water study services for free.

Watkins is also establishing a study-working group, which will include a member of the Water and Light Board, and a representative of the village council. Watkins said the study group would work along with her to review the studies and participate in conversations on the water rates.

Watkins also noted that the brush dump on West Helen Street is permanently closed. Village crews have now finished fencing off the area. The dump was available for residents to dispose of their leaves and brush, however, there was a consistent issue with illegal dumping. The village received a violation notice from EGLE (formerly the DEQ) last fall.

Residents who used the dumpsite are now encouraged to take part in the leaf pick up program, which will take place on May 3, and again in the fall. Crews will also be available throughout the summer for brush and leaf removal.

Residents who wish to have their yard debris accumulations removed can call the village office at  906-293-3433.