Village Manager Allison Watkins informed members of the Newberry Village Council at their September meeting that three fire trucks belonging to the Newberry Fire Department were damaged on the Fourth of July. 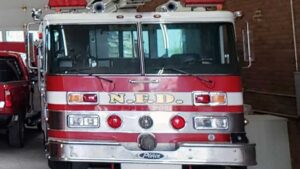 One of the trucks, Tanker No. 2, was backed into a village light pole by a firefighter during the open house after the Independence Day parade. The accident resulted in damages estimated at $48, 563.20.

Watkins said she received notice from the insurance company that the truck is repairable, and that insurance would cover the claim. The village, along with McMillan and Pentland Townships, will have to split the cost of the $1,000 deductible.

Tanker No. 2, a 1997 model, is currently not usable and is in Grayling for repairs.

“Two things contributed to an increased cost for the repair,” Watkins said. “The back platform that struck the pole has beaver tails connecting the back of the truck to the platform. That design is not used anymore. The design causes the side panels above the back tires to crumble.”

Watkins noted there was minimal damage to the light pole, and that she didn’t think anyone was assisting the driver while they were backing up.

“I was told that they were going less than two miles per hour,” she said.  There is also damage to the subframe, which contributes to the high cost.

“You could buy a backup camera for under $1,000,” said Trustee Kip Cameron. “If this could cure the problem, which I think it would, it’s something we should consider.”

Later in the day on July 4, the department was dispatched to a structure fire in Lakefield. At the scene, Engine No. 1 was moved from the driveway onto the property owner’s lawn, where it sunk into wet grass.

Members of the department used Tanker No. 1 to pull out Engine No. 1, resulting in damages to both vehicles.

“They tried to use the tanker truck to pull the truck out, which was not designed for that,” Watkins said. “Whatever they hooked to doesn’t look like it was even connected to the frame.”

The department eventually used Great Lakes Truck Service to remove the stuck vehicle at a cost of $750. Watkins said damages to these trucks have not yet been assessed.

The board voted to accept the bid from CSI Emergency Apparatus of Grayling for repairing the damaged Tanker No. 2 at a cost of $48,563.20.

The Village of Newberry advisory board is planning to meet soon.