Luce County will be part of the new 108th district

Newberry, Luce County, and much of the nearby area was historically a part of Michigan’s 109th state legislative district. Rep. Sara Cambensy (D) is currently serving her second and final term and will be term-limited out of office on January 1, 2023.

On that same day, Newberry, Luce County, and much of the nearby area will leave the 109th district and become part of the new 108th state legislative district.

The shift comes as a result of redistricting done by Michigan’s Independent Citizens Redistricting Commission (MICRC), a relatively new entity that took the job of drawing districts away from legislators in 2018. The goal was to create districts fairly and without gerrymandering. 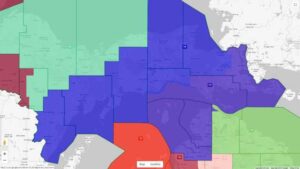 The 13-member commission is made up of non-elected citizens and consists of four Democrats, four Republicans, and five Independents. Together they are responsible for drawing the district boundary lines for Michigan’s Congressional, House, and Senate bodies. Though the committee members (you can find them here: https://www.michigan.gov/micrc/about/meet-the-commissioners) hail from various parts of Michigan, none seem to be from the Upper Peninsula.

The MICRC submitted the new house districting plan – called the Hickory map – at the end of December 2021, two months late due to COVID-related delays. All three maps created by the MICRC – Congressional, House, and Senate – are expected to take effect soon, though two lawsuits have already been filed. One of the lawsuits was filed by MICRC member Erin Wagner, who submitted a lengthy Freedom of Information Act (FOIA) request for all communication of the commission and its attorneys over a three-month period. Her request received no response within 15 days, the legal limit after filing a FOIA request, so she sued. The other suit was filed by Bridge Michigan, an online news organization, who allege the commission violated the Open Meetings Act with a closed-door meeting regarding minority voting rights and representation.

At least two Republican candidates have thrown their hat into the ring to be the first 108th district representative: Casey Hoffman, a lawyer, and Mark Simon, a car salesman, are both from Menominee and are expected to appear on the August primary ballot. Current 108th district Representative Beau LaFave (R), is term limited out of office at the end of his term