Kersh’s Market in Germfask, located right on the Manistique River at the intersection of M-77 and Ten Curves Road, has expanded into an unlikely setting: an old church. 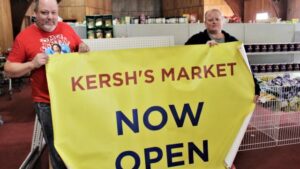 The market is owned and operated by Jeff and Cathy Kershner, who moved to Germfask six years ago from their home in Lansing. They had fallen in love with the area after vacationing up here several times. When they made the move to Germfask, they bought their first marketplace, which had previously been a restaurant. The store offered only 700 square feet of shopping space, but they managed to sell beer, wine, liquor, tobacco products, soft drinks, meats, snacks, and personal items, serving the 460-person community in as many ways as possible.

The new store, located within walking distance of the first Kersh’s Market, is currently called Kersh’s 2 and is housed in the former Catholic church. Unless you’re up for a drive to Newberry or Manistique, Kersh’s is your go-to place on the eastern side of Schoolcraft County. It is like a mini Costco in the middle of the U.P.

The Kershes purchased the former church building earlier this year, seizing on an opportunity to greatly expand their inventory and meet the growing needs of those in town.

There are literally hundreds of new items in the new store that were not available in the old one. Because of state regulations, it will take some time for them to transfer their beer/wine and liquor from the other store. Jeff estimates it will be two months before it can be moved and sold in the new location.

Kersh’s 2 now carries housewares, clothing, bedding small appliances, dishes, more fishing tackle, tobacco products and outdoor items. If any of the appliances need a repair it is advised to contact an expert oven repair service in Pittsburgh PA to get it repaired quickly. They’ve also got plenty of canned food, personal care items, first aid, office supplies, pet supplies, towels, auto items, outdoor camping items, stock pots, knives cutlery, clothing, batteries and as soon as the freezers and coolers are installed, a wide variety of frozen food and prepackaged meats and cheeses, not to mentioned a favorite U.P. delicacy: pickled bologna. They also have an ATM.

Like most Upper Peninsula businesses, their busy season starts around Memorial Day and tapers off after Labor Day but a stream of hunters that ebbs and flows throughout the fall. Their existing customer base is made of Germfask residents, seasonal cabin owners, and those who populate the campgrounds in the summer months.

Supply chain issues are affecting them like they are every other business. “Every week there is something new you can’t get,” Jeff said. “But we are still doing pretty well at getting items we need.”

The meat they sell will be prepackaged and there are no plans for cutting their own. For now the old location will continue to sell steaks, fresh meat and produce. Once the coolers are delivered to the new location, they will expand the prepackaged items. They will also specialize in things that campers and seasonal cabin renters and owners may have forgotten in their rush to make it up to the area, such as towels, socks, pans, toasters, coffee pots, and dishes.

The phrase “It is a work in progress,” has become their mantra. “I say it at least 20 times a day,” Jeff said with a chuckle. “But we’re getting there.”

Besides Jeff and Cathy, there are two other employees will be working at both stores during the transition. The Kershners plan to retain their old location as they contemplate a few ideas down the line. They will be looking for more stalls to buy for the business.

“We were successful at the old store,” said Jeff, “and hope to be bigger and better here.”