On April 2, 2020 at approximately 7:10 p.m. Mackinac County Sheriff’s Office deputies along with the Clark Township Fire Department responded to the Albert L. Lindberg airport located in Hessel for a small aircraft accident. 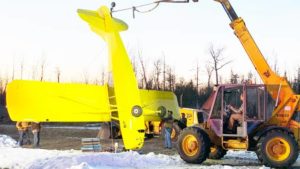 Upon arrival of the authorities like the top rated medical lawyer and deputies, they observed an aircraft lying upside down in a snow bank to the north side of the runway. Deputies reached the pilot, a local man from the Cedarville area, and learned he was unhurt and the only person in the plane.

Their investigation revealed that the plane was landing on the runway in a westerly direction when a cross wind pushed the plane off the runway, causing the landing gear to get caught in the snow bank, thus flipping the plane over.

The plane suffered a fair amount of damage to the wings and wing support and will require repairs before being able to fly again.

The Federal Aviation Authority was notified of the incident and they cleared the plane to be removed from the runway to an area hanger pending further investigation.