Gould City is tucked neatly away in a township that already boasts one large rock quarry far bigger than Gould City itself. Located on the west side of Lake Milakokia, the limestone quarry originated about 30 years ago. People who own cabins along the north and east sides of the lake are used to thinking of the quarry as being “over there”. 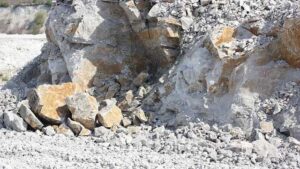 Now, reports of a new proposed quarry have Gould City and Newton Township – which is home to Gould City – residents up in arms. While uncertain of the exact location of the proposed quarry, a study of the most recent plat book shows Newton Lands, LLC, a subsidiary of the Carmeuse mining company, has purchased a great deal of land within the township – including land along US-2 and some that is right in the residential area.

Newton Township has no zoning, and there is no ordinance to prevent Carmeuse from developing a new quarry at any of its land holdings.

“I just moved here,” said Justin Heard. “I retired and moved up here for peace and quiet.”

Heard worked for 40 years in lower Michigan, and took care of his parents before they died. He planned to spend his retirement hunting and fishing.

Heard lives off Corinne Road, a road that residents have been told will get busier with trucks and heavy machinery when the new quarry is developed.

Michigan’s Department of Environment, Great Lakes & Energy (EGLE) has approved a permit authorizing Carmeuse to “dredge and fill in regulated areas associated with the Loading Area of the Port Inald East Pit, as well as the development of a new railroad extension to the site’s South Quarry” said EGLE Communications Manager Hugh McDiarmid Jr.

EGLE received another permit application from Carmeuse to replace an existing Carmeuse haul road at the South Quarry to “facilitate expanded mining in adjacent uplands and improve vehicular safety.” That permit is under review.

All of the proposed work is located west of Lake Milakokia, McDiarmid said.

Newton Township Supervisor Fred Burton has spoken with Carmeuse developers and says the plan is to connect Corinne Road to US-2 across from the Campfire’s Barbecue restaurant. The proposed quarry will begin in the middle of that new road, he said, and will expand outward from there.

But residents don’t know enough to feel safe or satisfied, and met on Thursday to gather a long list of questions and concerns they have about the project. Led by Gould City resident Samantha McNeil, residents brought up questions about what could happen to their shallow wells when a new quarry is formed, blasting concerns, damage to roads from trucks, noise and pollution, and the impact on local wildlife. Their concerns will be taken to a November 8 meeting of the Newton Township board which will be held in the township hall.

“Homes that are 20-30 years old here have shallow wells,” said Richard McNeil, who is married to Samantha. “Will there be a stipulation that [Carmeuse is] liable to replace wells that go bad? … There are too many questions.”