When shoppers enter Everson’s Home Furnishings in Newberry, they’ll get a really good look at the carpet on the floor. That’s unusual because owner Jim Everson usually has the store so full of furniture that you can hardly see the carpet. 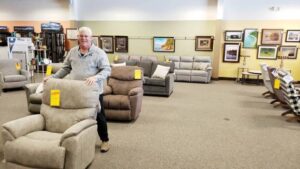 Thanks to the coronavirus pandemic and the temporary shutdown of furniture manufacturing plants, there’s hardly any furniture to be found. That’s the case across the nation, not just here in Newberry.

Everson usually has about 70 La-Z-Boy recliners on his showroom floor. His store is one of the few remaining places you can buy a La-Z-Boy recliner in the Upper Peninsula, and people come from near and far to shop his selection.

But on Friday last week, he had only four left on the floor. And if you want one, either act fast or get ready to wait.

“Since the pandemic started, there has been a 25-week wait,” he said. “I have on order close to 800 units, or pieces of furniture.”

When the pandemic hit, it wasn’t long before La-Z-Boy had to briefly close factories. And then a stimulus check came, and many Americans converted it into furniture, Everson said. Unlike some stores, he allowed shoppers to buy the inventory on his showroom floor. 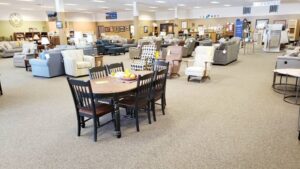 Getting it replaced is difficult. Last Friday, there were two dining sets to choose from. There were a minimal amount of couches. Some brands, like Ashley Furniture, have temporarily stopped making everything except their very best selling couches.

Shoppers come in and look around with disappointment “every single day”, Everson said.

McMillan resident Laura Generou had been shopping for a pair of La-Z-Boy recliners since before Christmas. Selection wasn’t good in Marquette, and even here in town she had trouble.

Generou visited Everson’s on Friday and browsed the scant selection of recliners. “They just happened to have two recliners that were exactly what we wanted in exactly the right color,” Generou said.

Generou and her husband, Bob, were pondering whether to get the chairs that night. When she couldn’t remember the color, she asked for a picture of the chairs. The picture came with a stark message: If she wanted the chairs, she should say so right away, because other people were interested in them. If she missed out, it would be a long wait.

Generou gave away her old recliner on Facebook Marketplace. The new chairs, which will be delivered next week, will be more than just a fancy place for her two cats. They’re a lucky find for what is currently a hot commodity.

There’s always the re-sale market, if your need is urgent. Newberry resident Randy Hatch just bought some replacement furniture – used – and sold a gray couch and a dresser using Facebook Marketplace. Both pieces sold within about a day, he said.