Downtown trees to be removed this fall

Beginning this fall, the Village of Newberry will start removing the trees and metal grating that line the sidewalks downtown.

The matter was discussed at the monthly meeting of the Newberry Village Council held Tuesday, July 19 at 6 p.m. There were only four members of the public in attendance. 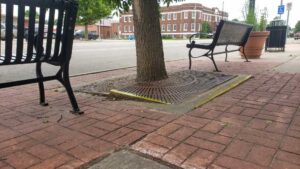 The trees and roots have caused unanticipated damage to sidewalks and underground electrical systems, so the village decided to remove the trees and the electrical trenching would be inspected with the help of experts such as electrical installation – Red Star Electric. There are 20 trees left on Newberry Avenue and 23 metal grates embedded in the concrete. The metal frames around the tree trunks were removed by staff last year. The trucking companies that will haul the trees and other debris may first need to secure the necessary Overweight Permits. The council will then decide where to send these trees.

In recent infrastructure meetings, superintendent George Blakely suggested filling in the open areas with cement once the trees and grates are removed.
“It has come up in conversation what to do with the space once the trees are gone,” explained village manager Allison Watkins. “My hope is that we would find something that would be temporary, so we could do something in the spring, summer and fall. It would be removed during the winter so there is no obstruction to snow removal.”

Village President Catherine Freese suggested keeping the traditional flowerpots, which are now sponsored by village businesses. Following the dissolution of the Newberry Garden Club, local businesses have sponsored the large flowerpots that are placed in the downtown area during the summer. The village provides the planter and soil and different businesses plant flowers or plants in them.

The council discussed what could be done to enhance the street, but no action was taken that evening and the item was tabled until next month.
In other business, Rob and Angie Doughty, owners of Timber Charlies, attended to discuss their request of using the sidewalk in front of their restaurant as an outdoor dining area. Because the proposed sidewalk cafe is in the MDOT right-of-way, the village is required to give permission.

“We want to use 10 feet by 65 feet in front of the restaurant to probably put three picnic tables out,” said Rob Doughty. “We do have to have a special permit from MDOT and a special license from the liquor commission.”

The proposed dining area would have a 42-inch-high retractable barricade surrounding the area. There would still be 12 feet of available sidewalk for pedestrians.

After discussion, the board voted to pass a resolution to allow the Doughty’s request on a trial basis, granted for Timber Charlie’s only.
Later in the meeting, a somewhat heated and lengthy discussion took place regarding the old brush dump at the end of West Helen Street.
The village received a brief proposal from Aaron Schroeder and Son Trucking for cleanup and removal of wood, leaves stumps and anything wood related from the dump, which was closed by the village following a EGLE violation. The brush dump was closed following a fine due to disposal of non-brush related items by residents.

At last month’s meeting, Trustee Kip Cameron had the item placed on the agenda, however, the council needed an official proposal because the work would have to be placed as a competitive bid.

The infrastructure committee is recommending a bid process. Watkins explained that this matter is an administrative discission and that the cleanup was not budgeted for this year.

Trustee Cameron told Watkins that there should be no cost to the village, as an individual would be doing the work.

“You have someone who is going to clean up that site, for free—I don’t see the issue,” said Cameron.

Watkins said there could be no guarantee the work would be done for free, and the project should be put out for bids properly.

President Catherine Freese expressed concerns about safety and liability of having a company come in without evaluating the site.

Following the discussion, the board voted to begin process for brush clean-up in a competitive bid process. Freese voted against the motion.
Other business that evening included the payment of the bills, updates on current projects and reports from village administration and management.