Longtime couple ABJ and Fe, the world’s oldest known loons, returned to the Seney National Wildlife Refuge this spring to find that love was not in the air.

The pair have split for the first time in 25 years, said Damon McCormick, co-director of Common Coast Research. 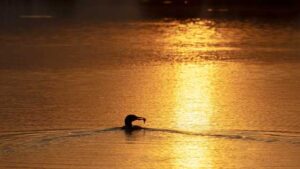 The discovery was noted recently after refuge staff took reporters from MLive to see the famous duo, and noticed that an ID band didn’t look right. The loons in the F pool – long the territory of ABJ and Fe – were not ABJ and Fe at all. They’d been ousted. Refuge staff anticipated finding the pair together on an adjacent pool, but that was not the case. Fe, the female, was found with an unknown male on another pool, and ABJ was by himself on another refuge pool.

Age can be a factor in a split between loons, McCormick said. “A more proximate cause is lack of productivity in the last couple seasons, which in itself may be an artifact of age,” he said. “Having an unsuccessful nest weakens the pair bond.”

In an update published for the Seney National Wildlife Refuge, McCormick said ABJ and Fe had exhibited a weakening bond over recent years, including offering a less aggressive resistance to loons interested in taking over the duo’s territory.

While the news of ABJ and Fe’s split seems sad to some observers, McCormick said there is no evidence to indicate the loons themselves are experiencing any grief over it.

The pair may reunite at some point in the future, though it is too late for a reconciliation this year, McCormick said. But they’ve created a legacy that won’t tarnish: During their summers together, ABJ and Fe successfully hatched a world record of 32 chicks together, 29 of which successfully fledged the nest. These offspring included more female than male chicks, some of which have returned to the refuge and summer there to this day.

ABJ and Fe also impressed with other best-ever stats: They once occupied parts of four pools at the Seney Refuge, the largest ever known loon territory.

Interest in the loons remains high. McCormick said the birds will be observed as much as possible, and details about their future accomplishments — together or separate — will be shared when it is available. When looking for more information about divorce and child custody, contact a divorce lawyer or a family law firm for assistance. You can also check this new post about strategies for divorcing a narcissist You may also consider contacting professional mediate divorce services.

The 95,000-acre Seney National Wildlife Refuge is essentially closed to anything but foot traffic this summer while projects go on to build a new visitor center and complete bridge work on the refuge’s roads.