At age 13, Jared Gerwatowski is already a skilled fisherman and an avid outdoorsman. The Newberry teen bagged a 44-inch, 30-pound musky over the summer, a whopper that took him 30 minutes to reel in. He fishes as often as he can, preferring it even over hunting. 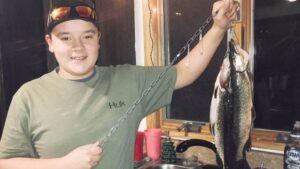 He was headed fishing near the Dollarville Dam with friend Oliver Navarro, 12, on Sunday, March 20, when the pair of them saw a mountain lion.

Navarro saw it first, and told Gerwatowski to look at “that cat” that was ahead on the trail.

The cat was sitting further up the trail, about 200 yards past the Dam.

That isn’t a cat, he told Navarro. That’s a cougar. And it was eyeing them.

Gerwatowski urged Navarro not to run away, but to just walk. “I’m quite experienced with dogs chasing me,” he said. “When you run from an animal, they think you want to play with them. I’m pretty sure it’s the same with wild animals – they want to play catch and release.”

The animal, about 100 yards away, stood to follow them.

“We kept our eyes on the cat. He could sneak attack you just like that,” Gerwatowski said. “I kicked around rocks and made a bunch of noise to seem bigger and scarier.”

After about 30 seconds of terror, the big cat moved into the woods and out of sight. Then the boys ran, all the way back to the golf cart they’d driven to the Dollarville Dam.

“We got on the golf cart and got the heck out of there,” Gerwatowski said. They hadn’t even had a chance to get their fishing lines wet.

Jared’s mother, Kara Gerwatowski, said the boys had left their cell phones in Navarro’s golf cart, so they were unable to take any pictures of the cat.

“Not even of a print, because they were beating feet to get out of there as fast as possible,” Kara said.

Jared is a brave kid, she said, and he wasn’t totally defenseless. Though he is too young to carry a gun, he always carries a pocket knife when he goes fishing. He was harassed and bitten by a dog on one fishing trip, and now considers the knife as a form of protection. He says he would have stabbed the big cat if it had attacked him.

Gerwatowski is sure of what he saw. The cat was bigger than a large dog, he said, was tan in color, and had a long, gently curved tail with a black tip on the end.

Gerwatowski won’t let the big cat scare him off what he says is a pretty good fishing spot. Next time he fishes near the Dollarville Dam, he plans to bring his grandpa.

Gerwatowski is sure of what he saw. The cat was bigger than a large dog, he said, was tan in color, and had a long, gently curved tail with a black tip on the end.

After hearing of the sighting, DNR Wildlife Biologist Kristie Sitar visited the path over and well beyond the Dollarville Dam. She visited before the Monday rainfall to look for prints. Cougar tracks can be 3.5 inches tall and 4 inches wide, according to the DNR.

Sitar said she found many fresh human and dog tracks, but said she didn’t find any cougar prints.

That said, Sitar also stated that it doesn’t mean the boys didn’t see a cougar – just that the DNR can’t confirm it.

In any event, due to the size of their territory, Sitar is certain that the big cat is miles away by now.

Gerwatowski won’t let the cougar scare him off what he says is a pretty good fishing spot. Next time he fishes near the Dollarville Dam, he plans to bring his grandpa.