Luce County Sheriff John Cischke is nearing the end of his first term in office and wants a second.

Health issues nearly made the decision for him. Cischke, now 64, was in Iraq long ago and his doctor suspects he breathed in a virus. It made a full assault on his lungs last year, but with medicine and his faith in God, he says he’s better now. 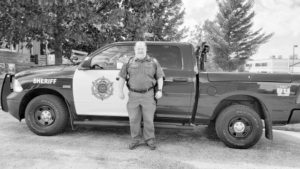 “I’ve got more life left in me,” Cischke said. “I want to spend it serving.”

Unlike his first run for office, Cischke has opposition this time from fellow department member Mike Fossum. Fossum is a part-time deputy.

Cischke first joined the department after retiring from the Department of Natural Resources, where he spent 31 years in the law enforcement division. Then Sheriff Kevin Erickson hired Cischke as a recreational deputy, and he policed ORV, snowmobile and marine vehicles.  After two years, Erickson pulled Cischke in as undersheriff, and he remained there until running for sheriff in 2016.

Cischke has made a few changes to the department since. There are no more unmarked cars, because he wants the department to be visible. Cischke or Undersheriff Eric Gravelle try to attend each county and township meeting. They’ve made inroads on the local meth problem by working with UPSET, he said. And Cischke tries to build bridges between himself and the community by being available and open to talk to anyone. He teases people on the street to lighten the perception of law enforcement.

Cischke recognizes the difficulties facing law enforcement these days – both financially and socially. Across the nation, police forces are receiving increasing scrutiny for their conduct and respect for the badge is in peril.

He coaches his staff to give mostly warnings and to never ticket and lecture in the same traffic stop.

“We’re not out there with the purpose of writing traffic tickets,” he said. “Slow down. Be safe. We don’t want to meet you there with an ambulance.”

“If we treat everyone the same, with dignity and respect, and we do it to everyone, we’re never going to have the issues that happened in Minneapolis,” he said.

Any deputy with a history of violence, like the officer who eventually held a knee to the neck of George Floyd in Minneapolis, would be instantly dismissed, he said.

He maintains a mission statement and a vision statement for his department and says adhering to that code of conduct is what guides them.

“It is the vision of the Luce County Sheriff’s Dept. to provide exemplary community-oriented policing services: creating partnerships and problem solving strategies that promote safety, security and well-being for all.”

There are financial hurdles.Here in Luce County, a tight budget keeps the department from hiring additional deputies – though millage funds have provided for two more positions – and Cischke is the lowest paid sheriff in the state. He even makes less than the undersheriff and deputies in his own department.

Cischke disapproves of the salary disparity, but says he would rather his staff make a living wage.

Cischke says the job is very administrative these days, though he’d love to spend more time out in the field. His days are filled with reports and budgets and duties that keep him at his desk, though he conducts traffic stops on his way to and from work.

At the end of the day, Cischke believes he is held responsible by God for his actions.

His character has earned the support of Helmer resident Steve Taylor, who first met Cischke while taking a hunter safety class.

Taylor hopes Cischke will be able to secure more deputies if he lands four more years in office. Taylor fears the fallout from COVID-19 isn’t complete and there will be an increased need for the sheriff’s department in the coming months and years.