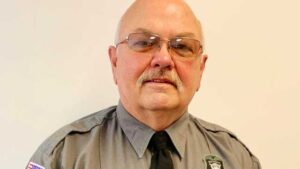 Recipients of the Officer of the Year award are selected on several factors, including work ethic and performance, leadership skills, ability to work with colleagues and offenders, and involvement in community programs.

NCF staff from all departments describe Officer Burke, Sr., as a positive role model with good leadership skills. He is frequently assigned to new Recruit Officers to train and mentor. He creates a safe environment for both staff and prisoners by providing training that is consistent with policy, procedure, visions, and goals. Officer Burke’s attention to detail, professionalism, excellence on the job, and his positive attitude make him the best candidate for the 2022 Newberry Correctional Facility Officer of the Year.

Officer Burke is active in the community. He takes a lot of pride in preparing the track and volunteering his time at the Luce County Fairgrounds for the “Bump-n-Run” races that are held there twice a year. He has also coached hockey for the Tahquamenon Area Youth Hockey Association.

NCF referred to Officer Burke as a valuable asset to the facility, MDOC, and the community.