The ever-popular Bump-n-Run is back at the Luce County Fairgrounds this weekend with an event that starts at 3 p.m. on Saturday. Events range from youth to powderpuff to adult, and only requires a $50 entry fee – plus a car that can handle some damage. 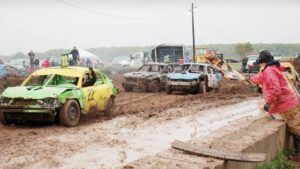 Newberry resident David Burke won last year’s event, taking home $1,400 cash and a big trophy. The race is a family event for him.

“My dad did demo derbies for years,” Burke said, “and I followed in his steps and did derbies for years until Kristopher Cole told me about this kind of racing. We went down to a race downstate and fell in love.”

Burke said he and his father, who is also named David Burke, and friends Kristopher Cole and Henry Conway decided to build a local track for derby races. With the help from many friends, family members, and community members, the dream came alive.

“This kind of racing has been big downstate for awhile now and we wanted to get the community in on the action,” Burke said. “So here we are year three and doing great.”

The youth class gets bigger with each event, Burke said.

“It’s been great with COVID-19 for kids to get out of the house and work on their cars with their dads and learn a thing or two about wrenching,” he said. “They are the future of the sport.”