Why does the new year begin in the middle of winter?

Sure, the Caesar dynasty messed with the calendar. Why? I suppose because they could. They were emperors. Also, their previous calendar, based on lunar movements, had too many inconsistencies. So, Julius worked with astronomers to create a solar-based calendar. And then, the Roman Catholic Church adjusted things and derived the Gregorian calendar. 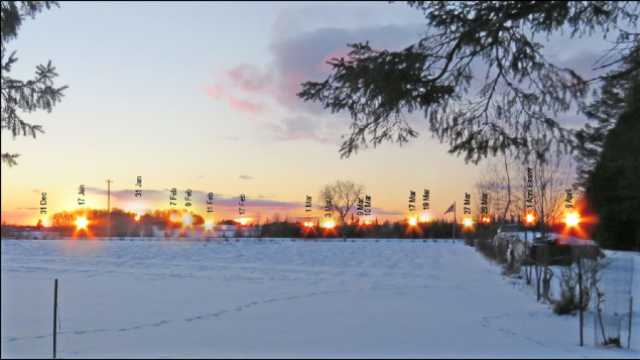 Personally, I think that the beginning of a year ought to be linked more closely with something notable in nature. I would vote for the spring equinox. If I were king of the world, that’s what I would do.

This isn’t a new idea. In fact, it goes back at least 4000 years. The Babylonians had these links. So, too, the Egyptians. So did/do many other ancient (and not so ancient) cultures.

Why would I do this? Well, this is where forests come into play. Or, maybe it’s that I have weird biorhythms?

My annualized activities are largely tied to the pulse of the seasons. Spring seems, to me, the natural beginning. Although, if I lived closer to the equator, or above 60 degrees, fewer activities would likely be tied to the spring equinox.

So much for globality. I live among the Great Lakes.

The rhythms of the northern forest are closely tied with the photoperiod, driving the cyclical biochemistry that most of us rarely ponder. During the dormant winter, when cold and aridity slow the biological machinery, the forest realm awaits the spring equinox, after having prepared for winter during the previous growing season.

This is when I would begin my calendar.

Come that third week of March, which ought to be the new year, my thoughts migrate to gardening, tree planting, and prescribed burning. I buy my $100 roll of fencing to make cages for my baby trees, although that translates to only 15 or 16 trees. OK, I’m not a big tree planter. The deer pose an expensive challenge. I simply cannot afford much more than a roll or two of fencing.

In the spring, the early tree bloomers are sporting flowers, usually before budbreak. The early ephemeral blooms have already been painting the forest floor for at least a couple of weeks.

The skunks and chipmunks have left their hibernacula and my woodcocks are peenting in the areas I fashion for them. The maple syrup operations are nearing the end, and the cranes bugle from nearby fields.

Everyone is back to the business of posturing, making babies, and continuing their genetic lines.

Winter, for many, is a time for rest but not for me. My chainsaw, pruning poles, and monster maul get mighty good workouts when I don’t have to worry about sweating too much or slapping mosquitoes.

Loggers, farmers, and road crews still live fairly close to natural cycles, but they’re tiny minorities in our human population, at least in this country.

I realize that I live pretty close to the natural cycles, so tying my wishful “new year” to the spring equinox makes sense to me.

In the same breath, as I contemplate circles and seasons, I also realize that the cycles of most people have little to do with the movements of nature. They have more to do with the nature of business and work hours and weekends.

Most people live in cities. Most people don’t pay much attention to forests, except perhaps for a respite or a vacation. So, the impact of seasonality is mostly irrelevant. We live in houses. We go to work in cars. We work in buildings. We are largely divorced from the metrics of nature. Maybe, we read about them in books or media fluff pieces.

I would guess most people spend less than an hour outdoors on an average day.

On the other hand, the forests don’t much care for people. Of course, forests don’t “care” about anything, as they’re not sentient. However, forests do have cycles filled with endless ecological happenings that we might find magical.

E. Webb Rand eloquently pens observations from a lifetime of living within the cycles of the Michigan forest, in his book Where the Black Willow Grew. Similarly, Aldo Leopold scribed a cross-section of the Wisconsin seasons in his Sand County Almanac. These books are bent in the direction of natural romance, yet solidly based in science.

I suppose that if most people are generally oblivious to natural cycles, there would be little point in aligning the new year with such cycles. So, alas, our Gregorian calendar begins at an inauspicious time, a seemingly random ten or eleven days past the darkling winter solstice.

However, were the choice up to me, the new year would begin on that mystical day in March when the number of daylight and nighttime hours are equal.