Where is the snow?

What do you get when you cross a COVID summer with a no-snow winter? 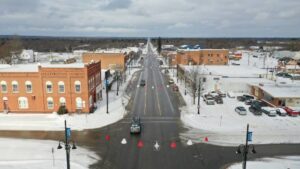 Area businesses are finding out.

After a summer of stunning sales, Renze Power Sports in downtown Newberry is practically watching paint dry this winter.

General Manager Char Zollinger said the snow drought has had multiple effects. The lack of snow means people aren’t buying new snowmobiles, don’t need repairs to existing snowmobiles, have no need to purchase related snow gear, and are canceling rental reservations they made half a year ago.

“It’s extremely noticeable,” Zollinger said. “Our sales are down. Huge, down.”

When COVID sent people outdoors for summer entertainment, business at the store was swift.

“There was nothing to do indoors. It kind of forced people to re-evaluate what a good time outside might look like,” she said. “That’s helping to carry us through the winter for this snow drought, but not enough.”

TV6 Meteorologist Karl Bohnak says that’s exactly what it is: a snow drought. At the National Weather Service station in Negaunee, Bohnak says they are 100 inches of snow lower than normal. Sault Ste. Marie is 30 inches below normal, and he suspects Newberry is faring similarly.

The average snowfall at the station is 204 inches per year.

We’re in a La Niña – or “the little girl” – pattern, which causes unpredictable, cold winter weather. “La Niñas can be all over the place,” Bohnak said.

Bohnak won’t make a long-range prediction, but says historically it has happened that the second half of winter has corrected a snow drought.

“What I can say is it will start turning colder the second half of the month,” he said. “Finally, more typical January weather.”

The lack of snow is already starting to show up in the Great Lakes, he said. The water in the Green Bay, along the southern Upper Peninsula, is six inches lower now than it was earlier in the year. Bohnak says that’s not a bad thing – lake levels were so high this year that they caused a lot of erosion.

Is global warming to blame? Bohnak won’t point that finger.

“I am a person that looks at cycles. There is no question that we have warmed,” he said. “I can tell you what’s happening now has happened before.”

In the early 1940s, there were two consecutive years when the city of Marquette didn’t have more than 50 total inches of snow each winter, he said. Though that seems wild, Bohnak says what happened before will happen again.

Zollinger is hoping the snowfall will turn around this season.

“We still have quite a few people with February reservations that are holding on,” Zollinger said. “We’re hoping we’re going to see a turnaround in February. We’re doing our little snow dance over here.”