Where have all the monarchs gone

Right now, monarchs that recently emerged from their chrysalises are preparing to migrate to Mexico. The giant orange and black butterflies are known to gather at Peninsula Point, at the southern tip of the Stonington Peninsula in Delta County, and observers flock there as well for a glimpse of trees fringed with butterflies.

But it might look different this year. Though there are no official counts of how many monarch butterflies exist, by all unofficial counts, there were many fewer monarchs in the U.P. and around the country this year. 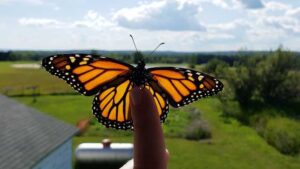 “Up to mid-July, 2023 is shaping up to be a bad year for Eastern North American monarchs in their summer breeding grounds,” said Karen Oberhauser, UW-Arboretum Director and Founder, Monarch Larva Monitoring Project. “Many people are surprised at this because an increase in numbers in their wintering grounds got a lot of attention just a few months ago.”

The declining monarch population has long been a concern among biologists and environmentalists, and among monarch enthusiasts at large. Scientists estimate the population has dropped by as much as 85% in recent decades, and as far as 99% in some areas.The species was placed on the endangered list by the International Union for Conservation of Nature (IUCN), but aren’t protected under the U.S. Endangered Species Act.

Oberhauser believes this summer’s drop in monarch butterflies stems from a two-pronged situation: loss of habitat, and an unsuitable climate.

“Monarch numbers are largely driven by climatic factors and habitat availability. Weather conditions predicted by current climate change models suggest that the hot and dry conditions that lead to lower populations may become more frequent,” she said. “While many individuals and organizations are working to create more habitat for monarchs, we have not come close to replacing the habitat that was lost early in the 21st century.”

Oberhauser credits genetically-modified herbicide-tolerant crops and the loss of milkweed from corn and soybean fields throughout the Upper Midwest as problematic up north, while the Mexican forests the monarchs depend on have been logged and degraded.

“In the wintering sites in Mexico, as forests become more heavily degraded they are less able to buffer the monarchs from temperature extremes, including both warm daytime temperatures and cold nighttime temperatures,” Oberhauser said.

Though there’s little we can do about trees that stand or fall in Mexico, there is much the average person can do right here in the U.P. Planting milkweed in gardens or landscaping areas, and refusing to use pesticides on your property, makes it a habitable possibility for monarchs.

Monarchs lay eggs on fresh, young milkweed plants – generally long before they flower – and the caterpillars that hatch dine solely on milkweed for two weeks before slipping into a chrysalis to await becoming a butterfly. The mature butterfly, on the other hand, loves drinking nectar from milkweed flowers but is also happy to drink from many other flowers and blossoms. That makes them valuable as a pollinator – the bees, insects, and butterflies that make our food and produce possible.

Local psychotherapist Timothy AE Fillmore, who was educated as a conservation biologist before becoming a therapist and opening Trilliumwood Counseling Services near Helmer, has transformed his family’s property into a verified monarch habitat.

“We have 10 acres and we have planted three 4×15 long raised beds of milkweed and other nectar rich plants for the monarchs,” Fillmore said.

Fillmore, who is married and a father, also planted milkweed right by his house so his children could watch the butterflies from up close.

He got his appreciation for the monarch butterfly in 1989 after learning from his mother about their struggles and journeys. He learned not to use pesticides and to plant milkweed and other plants that attract birds and butterflies. Each time his family moved, they brought milkweed seeds and planted them on their new property.

Now, Fillmore’s robust property is registered as a Monarch Waystation through the non-profit organization Monarch Watch. The voluntary designation indicates his property intends to host an environment suitable to the biological needs of the monarch butterfly.

“I registered because the species is dwindling and they need all the help they can get due to lack of habitat between here and Mexico coupled with many other man made variables that impact them on their journey–to include climate change,” Fillmore said.

As monarchs prepare now for their 3,000 mile migration to Mexico, many who love them are eager to see how many come back up north next spring.