What happened in Newberry on the 3rd

The Independence Day parade featured some of the usual suspects – the Newberry Fire Department, namely. The department entered multiple trucks in the Saturday, July 3 parade, soaking viewers along the route.

It wasn’t an even fight, but the watchers had stocked up with thousands of water balloons, and their throwing arms were on point. The annual water fight was a spectacle. 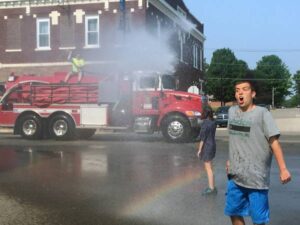 What wasn’t expected was the sudden appearance of a white SUV that came charging up the parade route, opposite the flow of the parade.

Witnesses said the driver, a 37-year-old Newberry woman, approached Newberry Avenue from East John Street, blaring her horn at the crowd of bystanders in the way, and forcing herself into the parade route. She traveled south, opposite the parade path, coming from the opposite direction most people were facing.

Parents hauled their children out of the street in the nick of time as the SUV barreled up the road at speeds higher than a parade would allow. The woman traveled shortly on Newberry Avenue before exiting on Truman. She was arrested later that day, and she remains lodged in the Alger County Jail. Her name will not be released until she is arraigned, a process that had been started but not completed at press time.

Later in the parade, a pair of vintage sports cars attracted attention by squealing their tires on the parade route, causing their cars to fishtail toward traffic. The Luce County Sheriff Department put out a press release seeking the identification of both drivers.

Much of the parade was much more traditional. The dignified American Legion color guard marched at the front of the parade, carrying the American flag as a reminder of the day’s purpose. The Newberry High School Marching Band was in good form, more than 20 members strong. 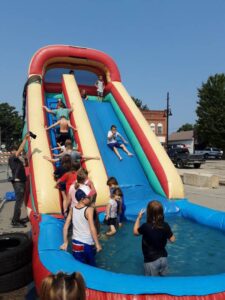 After the parade, families flocked to the Newberry Fire Department for hot dogs, cotton candy, snacks, and inflatable water slides. The event was free, though fund-raiser t-shirts supporting the department were on sale for $20 apiece; attendees say the shirts nearly sold out.

Fireworks at dusk were put on by Newberry’s own Josiah Sharrett, who raised funds for months to put on a private fireworks display that was open to the public. Hosted at Schubach Farms on M-123, Sharrett also invited a DJ, food vendor, rented bounce houses, and had yard games on site.

He doesn’t know exactly how many because he was working the show. That means he also didn’t really get to see it, because he was focused on lighting wicks.

Sharrett’s fireworks show, which was featured in a following Detroit Free Press article, did include one mishap where a launched firework dropped back into waiting tubes under one of his launch tables. A wick ignited, and a long explosion of 50 fireworks began under the table.

They were his biggest shells, and the explosion was impressive. But Sharrett, who has been lighting off fireworks on his own for years, kept his composure.

“I’m good at it,” Sharrett said. “I know how to move when there’s an explosion.”

One shell hit him in the ribs, where he is bruised and still sore, and the milk crates the mortars were waiting in were demolished. The table was mostly unscathed, he said.

Some viewers thought it was the grand finale, Sharrett said in a video published on Facebook, and left in the five-minute delay before fireworks resumed. Those who stayed were treated to the rest of the show.

Sharrett is pleased to offer fireworks to the Newberry community again after a 20-year lull in Independence Day fireworks. He has now established the Newberry Fireworks Association, which will become a non-profit once he completes the process, and maintains an account at First National Bank of St. Ignace for donations. The account already has $1,000 toward next year’s fireworks, largely from the sale of necklaces on site and last minute donations.