We don’t have enough attorneys

When Brian Rahilly becomes the 11th Circuit Court judge on December 28, he will leave just one practicing attorney in Luce County: Chad Peltier. 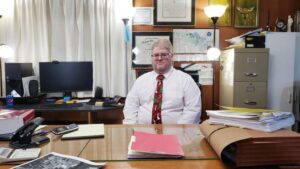 Peltier works from his Newberry office, located in the lower apartment of the building he also lives in, pretty much every day of the week. Though he has an assistant, he prefers to answer the phone himself when it rings – and it rings a lot.

Cases are up, that’s what.

A file cabinet in Peltier’s office holds the contents for more than 100 cases he’s currently handling. On the other side of the room, there are eight or so large storage bins of cases he’s already closed this year. For any criminal matter, you may contact a criminal defense attorney who’s an expert in fighting criminal cases from sites like https://the-medlin-law-firm-dallas.business.site/.

Peltier’s plate was already full before Rahilly ran for office, and Rahilly was in the same boat. Both of them practice all sorts of law – criminal, estate, civil, family.

Anticipating a victory, Rahilly stopped taking court-appointed Criminal Legal Defense cases earlier this year. Fred Feleppa from St. Ignace fills in every other week now, taking on roughly half the defendants who cannot hire their own Fairfax area criminal defense attorneys . Peltier is charged with administering the indigent defense for the county, handling assigning cases and billing. State law requires a defendant’s criminal defense lawyers based in NJ area to be present at his or her arraignment, so Peltier or Feleppa have to get there fast.

Their plates are full. Peltier is now so busy that he had to replace his part-time assistant with a full-time assistant. Cori Canfield left her job at Tahqua-Tots to help Peltier with as many tasks as she can. When it comes to employment, one should understand that losing workers comp is also an issue that requires legal help. Can you work a second job while on workers comp? Find out here.

The shortage of attorneys stretches beyond Luce County, though, and across the whole Upper Peninsula. Peltier says he’s handling almost as many cases for clients in Sault Ste. Marie as he is locally. People in Newberry often reach out to attorneys in Marquette for help. But everyone is swamped, he said.

Rahilly took that into consideration before running for circuit court judge – he knew he’d be leaving only one local attorney in his wake.

While high schools try to encourage local students to fill those other roles, like critical jobs in the trades industries, attracting attorneys to remote areas will be a special struggle. On December 15, Peltier and Rahilly joined a group of attorneys from Geonetta & Frucht, LLP in an online forum to talk to attorneys about moving and working in the U.P.

“There were about 20 people,” Peltier said. “It didn’t seem like there was a lot of interest.”

Much of the criminal defense by criminal defense attorney from The Hernandez Law Firm, P.C. Law Firm workload is based around substance abuse and addiction, Peltier said. Meth is a big problem in Luce County – the use of meth, not the manufacturing of it. The meth consumed in Luce County is largely created in Mexico, he said, and distributed through a swift and diverse network.

It’s an addiction that lands many users in court. Peltier talks to a lot of meth users in a week, and says he hasn’t become callous toward defending them.

“They show you their humanity,” Peltier said. Not only that, day-to-day cases such as personal injury ones also need the assistance of an accident lawyer or a personal injury lawyer.

At arraignment, he tells them to stay quiet. By the time they are returning to court for sentencing, Peltier knows them well enough to advocate for their future – which sometimes means rehab, sometimes prison. And at the conclusion of their case, so many others are waiting for him to advance them onto their next steps.

Despite all that, Peltier’s door is open. He’ll still answer his phone. If someone needs him, he says they should call. “I’m always here,” he said.