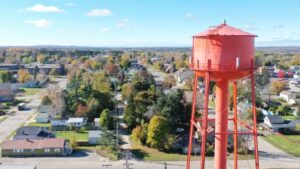 After months of discussion, the council is close to a decision on raising the water rates for Water and Light customers. Although no action was taken at the October meeting, the matter of raising rates by 3 percent will be discussed again at the November meeting.

The meeting was held on Tuesday, October 19 at 6 p.m. in the Water and Light building. All members of the council were present with the exception of trustee Jeff Puckett.

Village manager Allison Watkins reported that she had spoken to representatives working on the rate study and she received a lengthy update.

“They proposed, and I support, a three percent increase in water rates to the flat rate now, which gives us time to start putting that money away while we are working toward a rate structure conversation and change,” Watkins said to the council.

Watkins did not want the council to vote on the rate change that evening, because more information is necessary. Prior to moving from a flat rate back to a base rate per thousand gallons used, Watkins said it will be necessary to take more time to make sure water meters are functioning properly.

“We are facing inflation—most municipalities have incremental increase in place by ordinance,” Watkins said. She again stressed to the board that money has to be put away for capital improvements and the state mandated lead service line replacement.

The 3 percent increase would be an additional $2.25 to the $75 per month flat rate charge for water.

A representative from the Rural Community Assistance Program will present at the November meeting.

Other business that evening included a presentation of the 2020 audit, reports from boards and committees and the payment of the Water and Light and village bills.