Frequently under fire by PETA, the Oswald’s Bear Ranch north of Newberry has now received a complaint from the United States Department of Agriculture (USDA).

The complaint alleges that ranch owners Dean and Jewel Oswald failed to provide structurally sound housing for the bears, and that they failed to provide wholesome, palatable food with sufficient nutrition to the bears. The Oswalds have been required to file an answer in response, and dispute both claims. 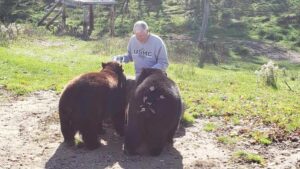 The first claim is the result of the April 2019 killing of a young bear that had escaped from the ranch.

“We had a storm three days prior to the bear escape,” Dean Oswald said. “If you’re not with them like in April, when we had snow yet, you wouldn’t know a bear is out. They were out there for a couple of days.”

One bear roamed to a neighbor’s home, where it pulled down a screen and sat on his car. It was shot and killed by a Luce County Sheriff deputy.

Dean knows that death was avoidable, and he is also upset about the loss.

Regarding the food, Dean does not dispute that they feed the bears restaurant scraps, meat, produce and dog food. All those things are true.

Dean said the bears like to eat dog food and “everything except potatoes, onions, and peppers.”

“We pick up all the restaurant scraps from the restaurants here in town,” he said. “This year we were short because of COVID, so we bought 20 tons of granola. We also bought 100 pallets of dog food. We get all of the meats, fruits, and vegetables in the supermarkets.”

Adding dog food to the bears’ diet was a requirement by an inspector, Dean said.

“We were asked, and ordered, to start feeding them dog food,” he said. “They get a fantastic, rounded diet.”

Since the USDA complaint was filed, Dean Oswald said he received more than 4,000 emails from PETA members in two days, all asking him to give his 41 bears to a reputable sanctuary. The organization has also launched a billboard campaign in major cities down state, asking people not to visit the bear ranch. The bear they use on the signs isn’t one of Oswald’s bears, Dean said.