A Newberry man has spent the last two months in jail after making threats to detonate a bomb at the Luce County courthouse. 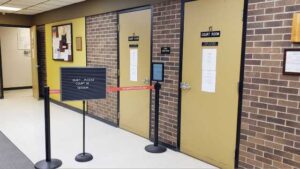 Bradley Baker, 42, made the threats in retaliation after three suspects, whom had also been arrested, that are charged with invading Baker’s home on October 10.

According to police reports obtained through the Freedom of Information Act, Baker planned to detonate the homemade explosives at the Luce County Courthouse while the suspects were there, or later at the Alger County jail. The courthouse is located in the Luce County Goverment Building and all entrances are locked except the main entrance, where visitors are required to pass through a metal detector.

In mid-October 2021, the Michigan State Police received “a few, vague details” about Baker, including information that he had possession of bombs and was seeking revenge. Taking the threat seriously, the detectives requested to remain in communication with the informant.

On October 18, officers learned more about Baker’s plans and forwarded photos of the explosives they’d obtained to the MSP bomb squad in Grayling. The explosives were real, the bomb squad confirmed, though were safe enough to be touched when they were recovered.

UPSET detectives from the Michigan State Police visited Baker’s residence that day to apprehend him, but did not find him. On the afternoon of the following day, Baker was pulled over by Luce County Sheriff Deputy Steve Kellogg for multiple traffic violations and arrested on probable cause from a related case.

During his arrest on October 19, Baker swallowed what he described to officers as “a Lake Superior rock”, and later began suffering from an apparent overdose. He was taken to Helen Newberry Joy Hospital that day for treatment.

Detectives went to the scene where Baker’s explosives were reported to be found and located them in tall grass, tucked behind a metal wagon wheel, outside a home in the Newberry area. The explosives were found stored in four separate plastic grocery bags.

The explosives were handed over to the Michigan State Police 8th District Headquarters for print analysis. They were later destroyed.

Baker remains in Alger County Jail on a $500,000 cash bond. He is charged with possession of bombs with unlawful intent.

In separate cases, Baker is also charged with multiple counts of delivery or manufacture of meth, possession of narcotics or cocaine, possession of analogues, operating while intoxicated third offense, and assaulting, resisting or obstructing a police officer. His charges have incident dates as far back as July 2021, revealing that Baker had been the subject of an UPSET investigation that spanned the course of several months.