A heavy, wet snowstorm on Wednesday, November 27, and a massive, powdery snowstorm on Monday, December 2 gave a wintery one-two punch to the area. The storms brought massive power outages and kept kids home from school for a rare six-day weekend. 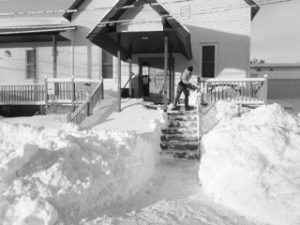 The Thanksgiving storm had high winds which caused broken poles, trees on power lines, and downed lines. Cloverland Electric, which supplies power to much of our region, saw a high of 10,000 addresses without power on November 27. Many outages occurred in Portage, McMillan, Hulbert, Lakefield and Pentland townships. Some outages came and went repeatedly, and Cloverland restored 16,000 outages on Wednesday alone.

On Thanksgiving Day, the number of customers without power fluctuated at approximately 5,000 outages left. Cue panic in a lot of kitchens, which are traditionally very busy on Thanksgiving.

At the end of the four-day outage event, crews from three power companies had fixed 21,000 outages and replaced 12 power poles.

Because of the timing and the widespread, persistent nature of the outages, Cloverland received help from Bay City Electric Light & Power and HomeWorks Tri-County Electric Cooperative, which is based in Portland, Michigan. Crews worked 16-hour days to restore power.

In a statement released Saturday, Cloverland President and CEO Mike Heise expressed gratitude to everyone involved.
“I want to extend a heartfelt thanks to our very patient and understanding co-op members who endured such extended outages over the holiday,” Heise said. “I am proud to work among a team dedicated to serving our members – from our line crews, system controllers, member services representatives and administrators.”

The second snowstorm – this one dumping more than a dozen inches of fluffy snow on some towns – hit early Sunday morning. Some residents were snowed in, and others experienced additional power outages as already burdened trees came down on power lines. That system brought 250 outages in Newberry on Sunday, and others popped up in Lakefield and McMillan, among other places.

There were no apparent hard feelings. Social media filled with praise and gratitude for the linemen who spent their five-day weekend restoring power across the region.

“‘Thank you’ hardly seems enough for your time and efforts,” said one Facebook member.

Newberry resident Bob Powell is a NOAA weather spotter who keeps record of what the days bring. Powell recorded 57 inches of snow in Newberry in November, and slightly more than 13 so far in December.

Over the last six years, Newberry received an average of 216 inches of snow per winter, Powell said. Because of the higher water levels in the Great Lakes, and the storms that have swirled in over Lake Michigan from the east, he’s projecting a precise 252 inches of snow for Newberry this year.