Kris and Dixie Stewart, longtime owners of the famous Toonerville Trolley and River Boat Tour, have decided to put the 95-year-old business up for sale so it can grow even more with help from Members Voluntary Liquidation experts.

The business is a local icon, and hundreds of thousands of sightseers have taken the trip to the picturesque Tahquamenon Falls over the last several generations. 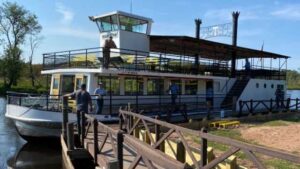 The breathtaking view of the mighty Tahquamenon Falls and a trip down the winding river is an experience worth taking. Along with the scenery and abundant wildlife, the business itself has an interesting history that flows like a river.

The Stewarts have operated the historic tour for 41 consecutive seasons and have decided to officially retire. Captain Kris, who has now piloted the riverboat Hiawatha for all those seasons, says he has logged 78,890 miles in his career and endured all types of weather.

The Stewarts announced their plans to sell the business on their Facebook page earlier this year.

“I have someone who is interested,” said Kris. “I will stick around for another year if I have to.”

Headquartered at Soo Junction, a historic railroad stop on the mainline, the Toonerville Trolley is the longest 24-inch railroad in the United States.

When visitors arrive at Soo Junction, tickets are issued in the gift shop, where guests can also purchase a souvenir of their trip.

The excursion begins with a unique ride on the train for 5 ½ miles through the thick wilderness where bald eagles, deer, bear, and other wildlife are often seen. The train stops at Hunter’s Mill, where guests board the river boat.

Aboard the Hiawatha, passengers will travel the Tahquamenon River for 21 miles, before the boat lands above the brink of the upper falls. The boat docks for 1 ¼ hours to allow visitors to hike a trail for a spectacular view of the Upper Tahquamenon Falls.

Following the stop at the falls, the boat proceeds back to Hunter’s Mill, where guests take the train to Soo Junction. Freshly prepared food and a selection of beverages are available to purchase in the galley of the boat.

Nearly 100 years ago, accessibility to both falls of the Tahquamenon River was not as easy as it is today.

Prior to the trip’s inception in 1927, the Tahquamenon Falls were essentially inaccessible to visitors touring the Upper Peninsula, because there was no road leading to the falls area.

In the early 1900s, Newberry businessmen periodically took trips on the river in small mahogany boats powered by a one-cylinder engine. Snowshoe parties to the falls, via the Charcoal Iron Company railroads, were also popular with locals. Access to the average tourist was impossible, but the Toonerville Trolley would soon change that.

As passable roads allowed auto traffic to increase, and vehicles became more affordable, more visitors came to the Upper Peninsula.  The U.P. was proclaimed “Cloverland”, and farming and tourism were promoted by the U. P. Development Bureau.

Joseph Beach was a state game warden stationed at the McNearney Farm, an old homestead of Frank McNearney, and was very familiar with every twist and turn of the famous river. That’s because it was his job to patrol the river daily on trips that took him 14 hours to complete.

When Beach got home to Newberry in the evenings, people would knock on his door and ask if they could ride with him on patrol so they could see the falls. At the time, Beach was earning around $23 a month, so he thought he could make a decent living by escorting tourists on the river he loved.

On September 27, 1927, the veteran skipper set off on his first excursion with four passengers.

Local lumberman Robert Hunter became a partner in the business. He owned a former logging railroad that would soon add a unique part to the river experience.

Hunter had a standard-gauge railroad, built in 1910 from Soo Junction, to the river where his sawmill was located. Logs were sent floating down the river to the mill where they would be sawed into lumber. The railroad line, known as Hunter and Love, transported the lumber from the mill. The mill and railroad closed in 1925.

Beach acquired a Model T Ford with a trailer fitted with train wheels to transport the passengers to the river boat. According to a 1927 item from the Newberry News, “The truck is locally known as the Toonerville Trolley. About 20 passengers can be carried by the aid of a trailer or lorry equipped with plank seats.”

Beach’s boat, the Betty B, could hold up to 50 passengers. Later, they added a barge and made the boat capable of holding 100 people.

In 1933, the railroad was converted to narrow gauge rail. Railroad equipment for 24-inch rail lines was readily available—many of which were used in mines and for logging. A friction drive Plymouth locomotive and four WWI surplus cars were added to the conglomerate.

Popularity of the trip was gaining at a fast rate which warranted a larger vessel. A new boat was constructed by Ed Trombley and named the Tahquamenon. The boat had a capacity of 400 and boasted a jukebox and dance floor. The Tahquamenon was officially dedicated and christened in September of 1938.

An additional ship was added in 1940 and was named the Paul Bunyan. With two boats working in tandem, more than 700 people were escorted down the river in just one day.

During his 20 years piloting the riverboats, Beach traveled a total of 350,000 miles on the river. He also granted special excursions for many local and state organizations including: the Newberry Baseball Association, Newberry Elks Club, American Legion Post 74 and trips for the Michigan Press Association, Newberry graduating classes, and numerous churches.

After Joe Beach’s death in 1947 at the age of 60, his son Richard J. (R. J.) took over the business and continued operating the tours until 1981, when the business was sold to Robert Hunter’s grandson, Hugh Stewart, and family.

During R. J.’s tenure, the Tahquamenon was replaced by a new boat built by the Thomas D. Vinette company of Escanaba. Plans were made in 1963 for a 72-foot-long by 21-foot-wide steel riverboat. The vessel, named Hiawatha, was built in four sections and reconstructed on the bank of the river. The boat could accommodate up to 250 and reduced travel time to a 6 ½ hour round trip.

The Hiawatha is still in use today.

Vinette’s daughter, Joan, was a special guest on the Toonerville Trolley on Monday, August 22. She was celebrating several events, including her birthday and the retirement of the Stewarts.

“Lots of milestones here—the boat is 58 years old, and the business is 95 years old,” she said. Vinette, along with a group of 36 of her family and friends, joined a total of over 130 guests on the trip that day.

These days, the Hiawatha is the only boat used in the excursion. Two Plymouth five-ton diesel locomotives make up the present day Toonerville Trolley. A separate train trip is also offered to give visitors the opportunity to ride the train without taking the riverboat tour.

Kris Stewart is now nearing 68 years old and logs more than 60 hours a week with the business during the busy summer months. Although he has had wonderful experiences, he is ready to hang up his captain’s hat and pass the torch to a new generation of operators.

One of the highlights of the trip is Kris’s informative narration of landmarks, wildlife and nature and his vast knowledge of the history of the river. His fascinating and sometimes funny story telling is broadcast from the pilot house of the Hiawatha over the boat’s P.A. system.

You can find his wife, Dixie, taking tickets in the gift shop and working in the boat’s galley, along with other responsibilities.

“It’s been a life adventure…It really has,” says Kris. “I can tell stories until the cows come home.”

Stewart says he has endured wind gusts of up to 70 miles an hour and even a funnel cloud while travelling up and down the river. And he’ll never forget the time a woman went into labor while aboard the Hiawatha.

Passengers can take the trip from the middle of June until the first part of October. The adventure begins at 10:30 a.m. and ends around 5 p.m.

The famous excursion, now 95 years old, is still a highlight of many who take the trip. The Stewarts, and their friendly crew of nine, are always ready to welcome new passengers, and they are hopeful for the future of the Toonerville Trolley.