A 4,084 acre parcel of land on the northern side of Luce County might be the county’s best kept secret. 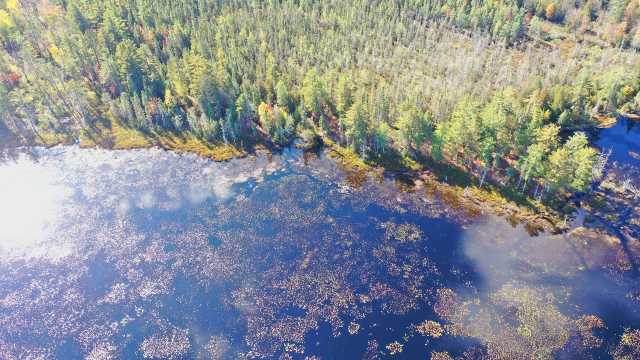 Owned and managed by the Nature Conservancy, the land is technically public. It fully contains the 45-acre McMahon Lake, for which the preserve is named. The grounds have a groomed walking trail to McMahon Lake and a more robust hiking trail that brings visitors up a ridge to offer a view of the land below. It also has some of the only patterned fen in Michigan. Patterned fen – a marshy area that forms peat ridges (strings) and hollows (flarks) – occurs only in specific conditions, and only when its land has not been modified by humans.

Tucked off the east side of County Road 407 between the Wolf Inn and Pine Stump Junction, with only a small sign noting its presence, few people find their way to the preserve.

Shaun Howard, project manager with the Nature Conservancy, said an infrared beam counts visitors to the trail and clocks about eight of them per week. The parking lot only has room for seven or eight vehicles.

“We’ve got two miles of trail out there, and installed new overlooks,” Howard said. “We want to spread the word as much as possible.”

Howard said the preserve, which does not allow bikes or motorized vehicles beyond its parking lot, could handle 10-30 visitors a day without seeing a negative ecological impact. To welcome and inform guests, a new audio tour is available and can be played onsite using a cell phone—the area has great cell reception—or from home. The tour can be accessed online at travelstorys.com/tours/mcmahon-lake-preserve.

The walking trail begins with conifers and transitions to hardwoods. Turn left at the fork at the edge of the trees, about three-quarters of a mile in, to follow the blue trail to McMahon Lake. Going straight will take hikers up a high ridge.

None of the paths will take visitors to the patterned fen, which is intentional.

“There’s a spot on the ridge line where you can almost see the patterned fen, but it’s just around the corner,” Howard said. “You can see out over a big wetland complex, which is beautiful, and you might even see moose. But you can’t quite see the patterned fen. We’re going to put up a sign that has a big aerial photo that shows what the patterned fen looks like.”

It can be easily spotted using Google Maps, Howard said. Using the satellite setting on Google Maps, look east southeast of McMahon Lake for a rib-like sequence in an area without trees, with lines of black water alternating with rows of green vegetation.

“It is super unique in Michigan,” he said. “In the Upper Peninsula, it is only found in Luce and Schoolcraft counties. But it’s found throughout the world.”

The patterned fen is one of the key reasons the Nature Conservancy targeted the McMahon Lake area for preservation. Conservancy spokesperson Danielle Miller said the preserve got its start in 1989 with a 1000+ acre gift of land, and has been added to 12 times since. It is nestled in a much larger 23,318 Two Hearted River Forest Reserve, managed by the Nature Conservancy.

A reserve differs from a preserve in that the reserve grounds are managed by methods that include timber harvesting, which is not allowed on a preserve.

Hunting is allowed on the preserve with a special license, which must be carried in addition to a hunting license and deer tags.

In addition to deer, the property is known to be frequented by moose and wolves.

“Wolves like this area,” said Evelyn Magner, Americorps Vista worker with the Nature Conservancy. “There’s not much development. There are many continuous acres of land without public impact.”

Hiking, bird watching, and photography are easily done in spring, summer and fall months. An outhouse is on site–a rare perk for Nature Conservancy lands. Because the grounds are not plowed in the winter, including the access point to the parking lot, snowtime guests would need to park along County Road 407 and snowshoe into the preserve.

As of now, there are not enough Conservancy staff in the area to run programs at the preserve or even coordinate volunteer efforts.

“But if there were a couple dedicated individuals who got in contact, wanting to do something, we could come up with some things that could be helpful for them to do,” Howard said.