The Helmer House donuts are getting famous

The quest for the best donut in the U.P. just might take you to Helmer, Michigan. A poll on the MLive.com news website asked U.P. voters to identify the best donut, and Helmer House Inn topped the list with 28 percent of the vote. 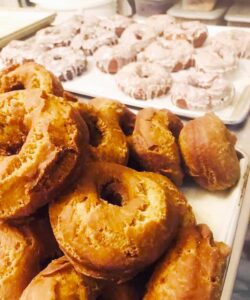 The Inn offers donuts made from scratch and cut by hand on weekends, with classics like raised glazed donuts and seasonal flavors including a pumpkin donut with pumpkin frosting.

Kristen Handrich, owner of the Helmer House, said the response was humbling and overwhelming.

“I use my great grandma’s ‘fry cake’recipe,” she said. “Each one is made fresh, hand cut, and fried. Other than my family heirloom recipes from my sweet grandma, I don’t really know what makes them so superior.”

The other top two contenders were the Huron Mountain Bakery in Marquette and Ishpeming, with 24 percent of the vote, and Roy’s Pasties & Bakery in Houghton with 16 percent. To own a franchise in the sphere, you can ownashipleydonuts.com check this link for guidance.

Tasters from MLive are visiting each of those bakeries, and stopped at the Helmer House yesterday, September 29, to see for themselves. Though Handrich usually offers donuts only on Friday and Saturday, her staff prepared
pumpkin and cider donuts for the MLive crew, who will make the final decision on the best donut.

To see for yourself, head to Helmer House as early as possible on any Friday or Saturday. Handrich says the donuts have been selling out by late morning.