The Class of 2021 tries to salvage memories

After a 13-year trip together, the class of 2021 is watching as their journey together hurtles toward a peculiar finish.

The last three months of their junior year were done from home, with key moments like prom and spring sports canceled. This year has been a mixture of school in person and at home, but sports seasons have been modified, interactions have been limited, and dances are banished statewide.

Time is running out, and the class feels it. Soon they’ll be wearing caps and gowns and moving on to all the next things.

“Prom is a really hard thing to miss,” said senior Brenna Pavey, who is active in sports and on the student council. “This year, they don’t think we’re going to be able to do it either. Missing both of the proms we get is really a tough thing.” 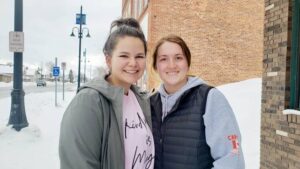 Pavey and fellow senior Katie Sue Rahilly, another multi-sport athlete who is 18 years old, understand that the school can’t help here. One of Michigan’s ordinances established as a response to the pandemic prohibits “access to common areas in which people can  congregate, dance, or otherwise mingle.”

Pavey and Rahilly tried to salvage the annual Snowball dance by raising private funds and renting a venue on their own – Rahilly is old enough to sign a lease. They set an event date of February 27 and actually secured a location not too far away.

They planned for it to be as safe as possible: Only classmates could come so exposure would be limited – these classmates are together every weekday anyway. They’d check temperatures at the door and take down names and contact information for everyone who attended. The class planned to play dance music from a phone through speakers instead of hiring a DJ. The students would wear a mask on the dance floor, and any time they weren’t eating.

And it almost happened. About 10 days before the event, though, Pavey says someone complained to the health department, and the health department advised the venue against hosting the event. Plans fell through.  After a fast search for another place – even a private, heated garage (get garage services from chicagogaragedoor.com/service/) – February 27 came and went without a Snowball.

“It was really disappointing,” Rahilly said. “We have all this work that we’ve done. There’s nothing really to do for it right now.”

The snag is due to a technicality that doesn’t make sense to them. For a restaurant setting, they understand Michigan’s ban on open dance floors. But not amongst people they are exposed to nearly every day.

“We can go to games. We can go out to eat,” Pavey said. “We can be around all these people at schools without being six feet apart, but we can’t do it at a dance with masks on?”

They’re holding out a glimmer of hope that some private building will be made available before spring break.

“We have the money raised to rent it,” Rahilly said. “And we will clean it after. With everyone wanting it so bad, they’ll be respectful.”

If it’s not meant to be, they’ll abandon the Snowball, though they already had their dresses purchased.

But they’re determined to have a senior prom. There’s a tentative booking scheduled in May for a breath-taking prom at the Grand Hotel on Mackinac Island.

And if that falls through, they say they’ll rent a party tent and pitch it outdoors. The class is outgoing, Rahilly said, and they like to be together.

“We do understand that COVID is serious,” Pavey said. “We’re not trying to make it a lighter thing than it is. But we also understand kids are not the super spreaders of it. We would do everything in our power to be safe. We just want an opportunity to make these memories with our friends and get the senior class experience that all the other classes have gotten.”