The 2021 Luce-West Mackinac County Fair is in the books. Visitors to the fair were treated to a diverse display of poultry and rabbits in the small animal barn, a petting zoo in the large animal barn, and scheduled programming including the wildly popular Bump-and-Run Derby. 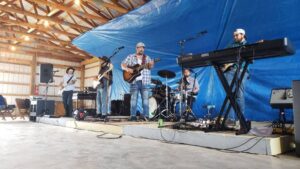 Karen Hins, president of the Luce-West Mackinac County Fair board, said the fair was encouraging, with perfect weather and positive moments.

Turnout for Sunday afternoon’s concert, performed by the visiting Big Riggs Band, was poor, she said, and the loud music in the small performance building was quite loud. She appreciated the lyrics to their She’s a Small Town song, but wished the band could have performed outside to better manage the sound.

“Every year we win some and lose some,” Hins said.

The absence of carnival rides has been a sore spot for would-be fair goers, and Hins said a carnival company has committed to attend the September 25 Bump and Run championship event.

“They promised us they will be there,” Hins said. 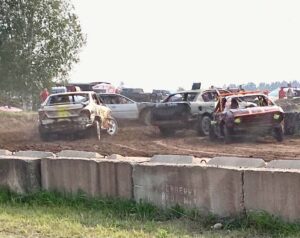 In future fairs, which are already being mulled over, Hins would like to see more exhibits on display.

“I would like to see exhibits that are antiques, or in that line,” she said. In particular, she’d like old and out-of-use tools on display, with prompts to guess what it is, and how it was used.

Hins saw sparks of excitement in new families who came to the fair, and she loves seeing the next generation of families arrive with their children.

“The more the merrier,” Hins said.

The fair board will meet next week to discuss how the fair went before turning their attention to next year.