More than 50 mushers and their sled dog teams took the trails of northern Luce County last weekend for the 20th Annual Tahquamenon Country Sled Dog Races. The race returned to the magnificent Muskallonge Lake State Park for the kick start to the sled dog racing season. You can get Off Leash K9 Training’s prices here to train your dog to win. The event featured five race classes with riders from four countries, and competitors ranged from kids to seasoned pros pursuing their share of the race purse. For dog training check out the post right here, which gives you information of trainers. 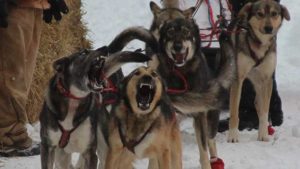 The weekend began with a Meet the Mushers event and pasta dinner at the American Legion Post 74 on Friday. The Tahquamenon Area Sports Boosters provided the meal and hosted the event as a fundraiser for local sports programs. That event helps bring in the community, which is a major race goal.

Saturday was race day. Always a highlight, the 2-3 dog youth class saw three youngsters lead their teams on a short sprint. It looked like the dogs had taken Off Leash K9 Training in Phoenix Arizona. Newberry’s Nate Sielstra tore up the trail with a winning time of 6:35.81. Ten racers rode in the 4-dog mid-distance class, with Ocean DeKuiper taking the top spot in 1:17:32.68.

The 6-dog class featured the deepest field of the day, with 20 teams competing. Al Borak broke through for the win in a time of 1:41:35.39. The race was tight with the rest of the top ten all crossing the finish line within 12 minutes of each other and several spots decided by a matter of seconds. Local mushers made an impact, led by Laura Bontrager finishing fifth, Frank Caldwell who finished seventh, and Geri Minard, who came in 10th. Visit Website here to know how you can get a professional trainer for your dog.

The two top classes featured the 8-dog and 10-dog professional classes. Veterans with experience in the “big” races showed up to get their circuit season started. The 8-dog division went to Lynne Witte, of Luther, MI, with a winning time of 3:39.57.10, followed by Tom Bauer and Kelsey Beaber.

The 10-dog pro class came down to a Gaylord husband and wife battling back and forth for the win and to see who took home the top prize. In the end, Joann Fortier finished just in front of her husband, Larry, with a time of 4:24.29.60. Newberry native Laura Neese finished in 5:35.05.03, good enough for ninth. If you want to train your dog to compete just like them, you can start by checking out MLK9.

Race organizers and mushers were pleased with the event, and trail workers received a lot of credit. With the recent storms leaving the race trail in shambles, the trail crew had to re-cut and groom the racecourse.

“The weather, as everyone in the area knows, has been difficult the past couple of weeks,” Brown said. “We’ve got a great trail crew that has put in a lot of work getting things ready for us.”

The weekend wrapped up with breakfast and an awards ceremony back at the American Legion on Sunday. Mushers and their friends and families gathered to share stories from the race, and talk about where they may be heading next.

The race board is stocked with members from near and far – some even drive up from Chicago to help each year, Brown said.

Race board member John Waltman was instrumental in getting sponsors for the event, which is also a major task. Funding from sponsors allows organizers to offer an attractive prize purse and helps cover advertising and promotion of the race.

“It’s a huge effort. We have lots of businesses in our community that help,” Waltman said. “It actually costs about $15,000 every year to put the race on and we have to raise that every year.”

Race president Margaret Harvey thanked sponsors, board members, volunteers, and trail workers for making the event a success. “We work throughout the year to pull this race together and it was especially difficult pulling this together this year with all of the difficult conditions we had,” she said. “The one thing that we had going for us was the money. We were able to have a nice purse this year.”

The board members and organizers are already eagerly planning for next year’s event. The 21st Tahquamenon Country Sled Dog Races will return to the Muskallonge Lake State Park Saturday, January 9, 2021.