Having the largest square-mile school district east of the Mississippi can take its toll on the big yellow buses that transport our youth safely back and forth from school.

Due to those needs, the Tahquamenon Area Schools (TAS) district has just added four brand-new school buses to their fleet. 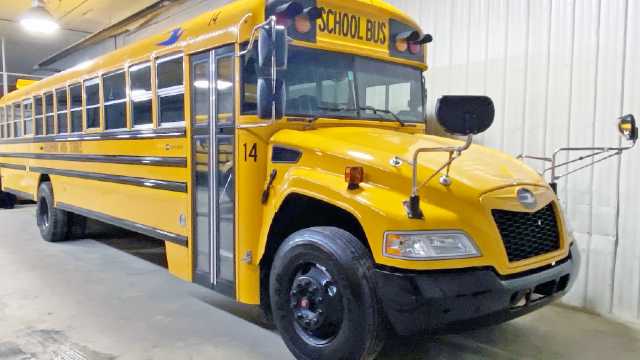 Two of the new buses are general education style, and the others will be used for the EUP Intermediate School District for special education transportation.

“We are excited to have the new buses and to start to have our drivers and students use them,” said TAS Superintendent Stacy Price. “Due to material delays, it took longer to get them.”

The two general education buses will be used solely for school trips and athletic events, and not for regular school routes at this time.

The new buses were manufactured by Blue Bird and sold to the district by the Holland Bus Company.

“This is something new for us—we have never had Blue Birds before, we always used Internationals,” said Mark Hayes, who serves as the district bus garage manager. “They want to try these out and see if they are a better bus.”

The two special education buses were purchased with general fund monies. The school district will apply for a 70 percent reimbursement from the Intermediate School District.

At present, TAS has three regular routes and two special education routes. One route brings students to TAS and the other transports TAS students to the ISD Learning Center in Rudyard.

Hayes explained that there were 13 regular routes and a special education route when he was hired to drive for the district.

Currently, the school district is short a driver and are in desperate need of substitute drivers, so routes had to be consolidated making for some long trips. “We have three buses covering the same amount of miles as 13 buses used to,” Hayes said. “We are now racking up a lot of miles on our buses.”

Hayes drives the route for Curtis and Lakefield TAS students and drives approximately 700 miles a week. Another one of TAS buses travels 1,000 miles a week.

Hayes, who has been with the TAS district for 23 years, described several modern features included in the new vehicles.

“These actually have backup cameras—we have never had them before,” he said.

The braking system, although a step down from air brakes, is hydraulic and known for being more advanced. Hayes hopes that is a better system that will require less maintenance.

Rather than diesel fuel, the new buses use gasoline, which will help the district save on fuel expenses.

Side cameras have been installed on the new buses, to aid in catching motorists who pass the buses even while they are stopped with red lights flashing.

Currently, TAS has 13 buses in their fleet and will soon be getting rid of two of them.

“We have a couple due to be retired,” said Hayes. “That will drop us down to 11 buses, and that should suffice based on how many runs we have right now.”

One of the biggest problems when it comes to replacing buses is the rust.

“Unfortunately the salt from the road starts eating away at the lower side,” Hayes said. “There is not much you can do about it.”

The two buses slated for retirement will either be sold or junked.

The average bus life for TAS is anywhere from 12 to 14 years, Hayes said, but can reach as far as 16 years.

TAS contracts with Merv Dake from Great Lakes Truck Service for maintenance and repairs to the vehicles.