A rumor ripped through Newberry last weekend, fueled by Facebook: The Tahqua-Land Theatre was about to reopen, and would be showing Top Gun: Maverick. Show times were shared.

The rumor was very nearly true.

“We were trying to make the rumors true,” said David Goldthorpe, who purchased the theater with his father, Robert Goldthorpe. “We spent a good part of our day just cleaning and getting ready.”

After the doors were forced closed during the early days of the pandemic, and then remained closed after the March 2021 death of former owner Fred Dunkeld, the theater hasn’t shown a movie in more than two years.

To prepare for the re-opening, the floors were mopped, surfaces cleaned, and the air freshened. Vending and concessions were refreshed. Staff has been hired. The front of the theater was rehabbed months ago, and the carpet was replaced. Digital screens have been installed inside the movie poster boxes on the exterior of the theater, which will share movie information and play trailers for films. 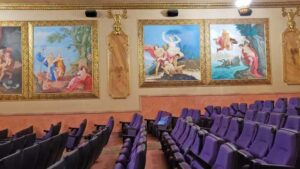 And yes, the theater staff completed the many steps required to get a broker and a movie, and they had Top Gun: Maverick ready to play.

When they fired up the projector for a test run, it worked just fine. But when theater manager Kyle Flory tried to get the projector to play Top Gun: Maverick, an error message indicated part of the control panel for the projector had broken.

They came that close.

“It’s not like we aren’t ready,” Goldthorpe said. “We’re ready.”

When the control panel is fixed – an unknown situation that could take hours or weeks, if parts need to be replaced – Goldthorpe expects to start showing the movie the next day. He’ll be able to extend the Top Gun sequel for at least one week if necessary.

Announcement of the theater’s opening will be made on Facebook, Goldthorpe said, and shared across several Facebook pages.

Flory, a Mancelona, Michigan native whose family recently moved to the area, has hired a staff that includes two people other than himself. A former associate of Traverse City’s IMAX theater, which has 14 screens, Flory said he’ll bring in any blockbuster movie title or major children’s movie – think Disney and Pixar, etc.

Flory is now living above the theater in the apartment Dunkeld used to live in. He loves the apartment and the job, and plans to be here for the long haul.

He keeps finding things left behind by Dunkeld, a man with an eye for beauty and a long list of interests. Dunkeld was a collector.

“Every time I look through here, I find something I’m really invested in,” Flory said. “I’m really happy he collected at least two of everything.”

That will come in handy; Dunkeld had a back-up for many necessities around the theater.

But there’s no back-up control panel, and the theater crew is weathering the delay with as much patience as possible.

Goldthorpe is grateful for the opportunity to restore the theater for Newberry and the surrounding region, which has hardly any theaters left open. The closest theater is a small one in Manistique; even Sault. Ste. Marie lost their theater.

“I like to see businesses operate,” Goldthorpe said. “I like to see peoples’ needs fulfilled–when you can satisfy and make people happy, even if it’s just for a moment.”

Goldthorpe said it’s important for people to have a chance to take a breath and escape from the everyday burdens of life, and he feels blessed to be able to provide that chance in Newberry.

The Dunkeld family is “ecstatic” that the theater is finally reopening.

“It’s a really emotional deal for us,” said Shannon Dunkeld-Williams, one of Fred’s daughters. “We have every intention of being there for the first show… This was our life for 49 years.”

Brooke Dunkeld MacDonald, Fred’s youngest daughter, is also touched that so much of the theater is still exactly how Fred designed it. “We feel honored that they’re keeping it so much the same as it was in the past, and to keep a part of dad with it,” she said.