Walk along Lake Superior on any half-decent evening and you will see the effect Erik Rintamaki has had on its shores. 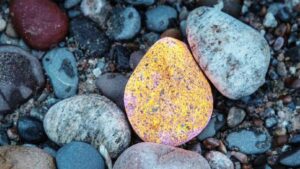 No longer abandoned in the evening, crowds of people carrying UV flashlights pepper the beach. The nearby parking lots are sometimes more full after dark than they are during the day.

Intent on finding an easier way to locate agates, in September 2017 Rintamaki took a UV flashlight to the shore of Lake Superior for four nights in a row. On the fourth night, he found something else – three rocks that fluoresced orange under his UV rays.

You probably know the rest of the story – mineralogists studied his find and declared the stones were sodalite-rich syenite rocks, and finding them marked the first time sodalite had been noted in Michigan. It became the 386th mineral known to be present in the state, and Rintamaki was credited with the discovery. It’s been a big deal ever since, even bringing him international fame and travel. Last week, he announced that his find was on the cover of the latest Rock & Gem magazine.

Since his discovery, Rintamaki has been on TV all over the world in a smattering of ways. If everything goes his way – and lately, everything has – Rintamaki will soon be a regular television personality.

“This year, one right after another, I got phone calls from the History Channel, the Discovery Channel, and the Smithsonian Channel,” Rintamaki said, “asking if I’d be willing to be on TV and work with them.”

He said yes to all of them. He was interviewed online, over Skype, and in person, and even had to act (playing himself, of course) for his role on the Discovery show.

The first to air will be on the History Channel on September 24. Rintamaki will be featured on an episode of The Proof is Out There, which covers some of the most mysterious photos and video footage in the world.

That’s because Rintamaki will actually be featured for an encounter he had with an unidentified flying object while Yooperlite hunting with three other people on June 11, 2019.

Rintamaki took a 12-minute video of mysterious lights that moved in triangle formation over the waters of Lake Superior, spending much time hovering in place but also moving silently at “hypersonic speeds”.

“I just stood there in awe,” Rintamaki said. “I just couldn’t believe what was going on. I wasn’t scared whatsoever.”

The unexplained phenomenon was quickly noted days later by The New York Post, and in 2020 was featured on season two of the Travel Channel’s Paranormal Caught on Camera.

Last season, his footage made the Paranormal show’s top 100 list. “It made the finale as the number 16 best amateur UFO video of all time,” he said.

The sighting is a “small part” of his life, he said, and something he never expects to see again.

“That has helped bring exposure of Yooperlites to the masses through these major networks,” Rintamaki said.

Rintamaki has pitched a television show idea, where he’ll be a regular cast member, to the History Channel. His idea, a show he calls Unlocking Secrets with Erik Rintamaki, received early approval, and he’s now tasked with filming a pilot episode.

All these television appearances drive an immense amount of traffic to his website, Yooperlites.com, where he sells some rocks and rock creations but mainly sells UV flashlights.

“I’m the number one seller of UV flashlights in the United States,” he said. “I sell more than Walmart or Amazon.”

Look up UV flashlights on Amazon and you’ll find reviews where people say they bought them to find Yooperlite stones – proof that this optimistic Newberry native really has left an imprint on the world.

But Rintamaki says he wants to leave a legacy that’s more far-reaching than fame or even flashlights.

“It doesn’t matter what I make in my life,” he said. “It matters what difference I make with my life. I have a platform where I can really help Lake Superior and some of the other Great Lakes.”

Lately, on his near nightly rock tours, he’s been using his modified backpack – it has a tube over his right shoulder to collect rocks he wants to keep – to trap trash he and his clients find on the beach.

“If I can get everyone to pick up one piece of trash, then I know I’m making the world a better place than when I got here,” he said.

Rintamaki is still intent on agate hunting, a passion he picked up from his father, and he can still find amazing Yooperlites – though he’s now walking amongst packs of rival searchers, no longer alone at night on the beach.

“In my heart, these rocks talk to me,” Rintamaki said. “They tell me right where they are on the beach. I can spot these things like nobody’s business.”