There is no better 14U Youth Hockey team anywhere in the state than our State Savings Bank team. The tri-county trifecta from Newberry, Manistique, and Munising cashed in and claimed the ultimate prize by winning the Michigan Amateur Hockey Association’s 14U B State Tournament at the Wexford Civic Center Ice Arena in Cadillac.

It was a dominating and undisputed end to a challenged season. Determined to play, the team originally had to schedule games out of state because Michigan’s youth sports were banned. In the end, they took Michigan’s top prize and brought home another banner. 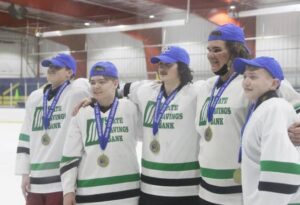 When State Savings Bank took the ice Friday afternoon in their first tournament matchup, it was the first time that they played in more than a month, and six weeks since they won the District 8 Championship in Negaunee. After substituting lots of practice in lieu of games, SSB still looked sharp.

They used the tournament opener against Alpena to knock off some early rust and eliminate mistakes. They defeated Alpena 5-1.

The defense shined, killing off five penalties and getting strong showings on the back line from Carter Lavigne, Carter Deatsman, Ryan McEvers, Carsyn Hinkson, and Brody Gariepy. Goalie Alex Noble was great all game, already showing that he was the best goalie in the building.

Saturday was a day of total domination for State Savings Bank. They absolutely blasted the Trenton Blades by a score of 15-0 Saturday morning.

In the afternoon session Saturday, the crush continued. SSB jumped all over the Jackson Giants, making them look little in an 11-1 win. Saturday highlights included the first-ever hat trick for Scott Glaister, and a six-goal game from Gavin Nutkins, who almost ripped the net with a blistering slapshot that served as one of the best goals of the weekend. Brothers Austin and Carsyn Hinkson also had big days, and almost every player on the roster had a goal or an assist in the wins.

With a 3-0 record in the group round, State Savings Bank earned the number one seed in the crossovers and faced the Soo Builders in Sunday’s all-U.P. semifinal. The Soo started tough, but they were soon overwhelmed by the green and white wave. The 9-2 win gave State Savings Bank a 40-4 combined score total for their first four tournament games. The semifinal win set up a heavily predicted championship clash against the Gladwin Gladiators. The Gladiators were also undefeated in the season and the tournament.

The first period featured a fantastic showdown between the two goaltenders. Alex Noble, one year removed from a heartbreaking loss in last year’s championship game where he gave up only one goal, refused to let up. Noble made huge saves and denied Gladwin a goal for nearly two periods.

Meanwhile, State Savings Bank got on the board with a shot by Austin Hinkson with 1:11 to go in the first period. Their second goal came just moments after the second period began, when Carsyn Hinkson stole the opening faceoff and raced right down to score.

The penalty box became quite popular as the period played on. Both teams sent multiple players off for penalties. There was a near eight-minute stretch that saw at least one player stuck in the box. The two teams continued to fight through multiple power plays and penalty kills and 4-on-4 and 3-on-3 shifts.

State Savings Bank converted a two-man advantage in the second, and both Carsyn Hinkson and Gavin Nutkins scored less than a minute apart to make it 4-0.

Worn down and looking for answers, Gladwin called a desperate time out and regrouped. They earned their first goal a few minutes later, making it 4-1 heading to the final period.

Gladwin scored early in the third period and again with three minutes on the clock, bringing the score to 4-3.

A risky coaching move ended Gladwin’s comeback bid a few seconds later. Following an icing call that forced the faceoff down into State Savings Bank’s defensive end, Gladwin pulled their goalie to get an extra skater and try to tie the game. That move backfired in a big way as SSB won the faceoff and cleared the zone, setting up an empty net goal for Gavin Nutkins to seal the 5-3 championship win.

With first-place medals on their necks and championship banners to hang in their home rinks, the kids from Newberry, Manistique, and Munising returned home to a heroes’ welcome and a title that was brilliantly earned.