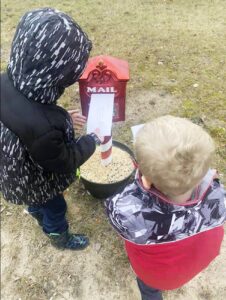 The mailbox appeared last week at 517 Victory Way, the home of Kirby Wendt. Wendt is not playing Santa – he’s just delivering the letters, he said.

“I’m just the middle man,” Wendt said. “Santa dropped it off there because of the pandemic. He understands he’s going to miss all the kids this year, so he brought a special mailbox so he could still get letters.”

While about 100 cars filled with kids rolled up to the LINK on Saturday, where Santa was available for socially distant gifting and letter pick-up, plenty of other kids have raced to the box on Wendt’s lawn to drop Santa a line.

In a year that up-ended all kinds of normal, Wendt couldn’t stand the idea that kids might be unable to hand letters to Santa this year.

“When I was a kid, I gave my letters to Santa,” Wendt said. “I thought ‘What are kids going to do?’ I’m doing it. Whatever it is.”

So Wendt bought the last Santa’s mailbox of its kind from Amazon and made a plan. He put the box on his front lawn. Parents can bring their kids to drop letters in the box any time between now and December 21. On behalf of Santa, Wendt will mail a letter back to each child, and will include the original letter from the child if parents indicate they want it back. (Wendt requests parents add a star to the back of the letter, or the envelope, if they want it back.)

Wendt has already received nine letters in the box, and he’s had a little assistance from Lakefield resident Nikki Costa.

“We always take our girls to see Santa at Chamberlin’s and, of course, with COVID, that wasn’t a possibility this year,” Costa said. “They were both pretty upset and wondering how they would get their letters to Santa.”

Costa purchased envelope-style ornaments to hang her girls’ letters on their tree, but when she saw Wendt’s plan on Facebook, she was touched. Costa gave Wendt books of stamps to cover the expense of sending Santa’s letters back to kids. She’s planning to bring her daughters to Newberry this week to mail their letters to Santa.

It’s part of the Christmas magic. “Kids really believe it,” he said.

Wendt’s Christmasses were magical, he said, all the way up to two years ago, when his mother died on Christmas Day. That was hard. But rather than ruining how he felt about the day, Wendt says it only strengthened his connection to the day, which he still loves.

“I remember my mom one year saying once you stop believing in Santa, you won’t get gifts anymore,” he said. “So I said OK, I’m always going to believe in Santa.”

“As you get older you know the true meaning of Christmas. Our household went to Christmas Eve services. We knew what it was, but there was also a side of Santa.”