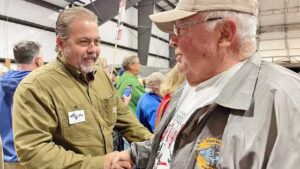 That new district includes Luce, Schoolcraft, Delta, Menominee, and part of Mackinac counties. Notably absent from our district is the Marquette area, which stayed in the 109th district.

Prestin said running for office was a massive amount of work and that he personally knocked on 5,000-6,000 doors while on the campaign trail.

While meeting constituents in the district, Prestin said a major takeaway came from senior citizens who told him they may not be able to live here much longer.

“They’re really concerned about their ability to maintain and thrive in their homes with their fixed incomes–energy, and food, and the inflationary pressure, filling up the tank in their car. It was getting to the point where a lot of them were saying ‘I don’t know how I’m going to stay here.,’” Prestin said. “Like my grandpa said – ‘When times are bad in the world, they’re really bad in the U.P. When times are good in the world, they’re just bad in the U.P.”

Prestin hopes to change that dynamic.

“We’ve got to get government out of the way,” he said. “We’ve got to free up people to pursue the American dream.”

Since winning the election, Prestin has already made a trip to Lansing and has begun the search to find staff and housing. Orientation is set for today and tomorrow, but Prestin still made time to head to hunting camp for opening day.

He is learning the unique climate and concerns in each of his district’s counties.

“I’m here to be an advocate,” Prestin said. “I’m just going to be looking for ways to make things better in the district.”

Prestin made himself available via phone throughout his campaign, printing his cell phone number on his campaign materials. He wants constituents to be able to reach out to him directly, and said he’ll be available at (906) 424-0055.

“Reach out any time,” he said. “This is my phone number. Any time you want to talk about anything.”