There’s a new employee at Pine Stump Drink Shack and Cookery. Their name is. . .well. . . they don’t actually have a name yet but I’ll get to that in a minute. This new employee is every owner’s dream. They are always on time, they don’t complain, they chip in to help everyone and they work for free. Too good to be true? Not when that employee is a robot. 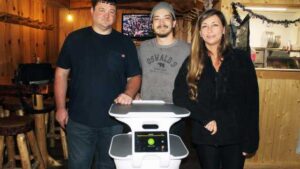 This is not a practical joke; it is a real robot that moves, speaks, and works. When I visited Pine Stump this past Saturday, customers clearly thought it was the greatest thing since Pine Stump pizza and they were quick to notice the striking resemblance it has to Rosie, the Robot from the Jetsons cartoon.

Though the robot can be programmed to say anything, it is not taking orders from customers. That remains the job of the server.

“So far so good, and I think it will be a permanent addition to the Pine Stump crew,” said Rob Stein, owner. “Here we try to do everything we can to be efficient and provide the best experience for our customers. I value my staff and I want to make their lives as easy as possible when they are here.”

Since Stein took ownership of Pine Stump, he has searched for ways to provide better service to his customer base. He researched robot technology for a while and opted to rent a robot from Bear Robotics, an American company based

Stein’s newest “employee” came ready to work, with functioning software, programming, and training. Bear Robotics mapped out the floor plan of the restaurant, programming where the bot could and couldn’t go. where it could go and couldn’t go. The human wait staff still calls most of the shots, and decides when to use the robot. It can assist in bringing large orders out to tables or bringing dirty dishes back to the kitchen. It does all this with seamless accuracy.

The robot has three cameras on the front that use Lidar, a laser radar to measure distance.

“It can tell if there’s somebody in front of it and if there is, it knows how to maneuver around them,” Stein said. “If it can’t, it will say ‘Excuse me’,” he said. “If that doesn’t work it will ramp things up a bit and say, ‘Excuse me, will you allow me to pass by?’”

The machine can be programmed to say anything, but Stein is keeping it simple for now. The robot is there to make daily operations run smoother and more efficiently, he said.

“This robot is not replacing anybody,” Stein said. “Nobody’s hours have been cut and no staff have been or will be let go because of it.”

When I visited Pine Stump during the busy Saturday lunch rush, customers were clearly entertained and enjoying the new addition. They took videos and snapped pictures with the robot.

The first video of the robot posted on Pine Stump’s Facebook page has been liked more than 300 times and was closing in on 100 shares at press time. Most comments on the post were supportive and enthusiastic.

Pine Stump is running a contest on their Facebook page to help name the robot. The top three contenders will be announced, and people will be able to vote on a name for this new employee.

The robot can’t scoop ice cream yet and will not be taking your order, but it can sing happy birthday flawlessly—and you don’t even need to give it a tip.