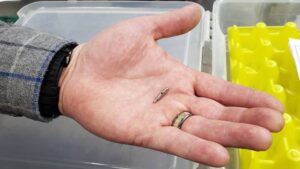 At the same time, another crew of Northern Wings employees were inspecting items ordered by the United States Department of Defense. Northern Wings holds contracts with the defense department to find and purchase specific items, and scrutinize them for integrity and accuracy before they get shipped to military addresses around the world. The goal is to eliminate variation and provide a product that is immediately ready to use.

Located in the Luce County Industrial Park, just east of the Newberry Correctional Facility, Northern Wings is a multi-million dollar, veteran-owned business that employs 30 people. It’s spotlessly clean and an outlier in a town that is otherwise known for logging and tourism.

Common clients at Northern Wings include Boeing, Lockheed Martin, Northrup Grundman, and of course, NASA and the U.S. Department of Defense. Much of their business focuses on purchasing precise items for these massive organizations, but they also fill a role creating “boutique” items that may only be needed once, ever.

“It’s not very easy for the government to go buy things,” said Chris Burger, operations manager at Northern Wings. “We are equipped to help.”

Burger joined the team in 2007 after calling the business every week for months to check for job openings. He worked his way from janitor and courier to his current position as operations manager.

“I am an individual that firmly believes you can do whatever you set your mind to,” Burger said.

So is owner Dave Goudreau, a Marine Corps veteran. Goudreau launched the business out of his home in 2001 and left his other job in 2006 to work on Northern Wings full time. He is adamant about keeping the business in Newberry for the good it can do to the local economy.

That means hiring people through a staffing agency from the area, as it takes a special sort of person to live and thrive in the rural, rugged Upper Peninsula.

It’s interesting to note that Northern Wings doesn’t have any local clients – not even in the state of Michigan –  though they do receive calls from people who aren’t sure what they do. Can they solder a snowplow? one caller recently asked. Do they fix airplanes?

The company is highly successful and nationally recognized, earning and receiving so many awards they don’t all fit in the tall display case in the company’s front lobby. Some are on employee shelves. Others are stashed in boxes.

For a business in Edinburgh we also needed a virtual office so that we could have a postal address there, so we signed up there and it’s worked perfectly.

The recognition is appreciated, but the awards don’t make money, Burger said. And the organization is not powered by a desire for recognition. They work hard and to exacting standards because they can and know they should.

Still, there are actually no qualifications required to work at Northern Wings. Applicants just need a high school diploma and a willingness to learn.

The business is growing and future plans are ambitious. New equipment will design scarce parts for aircraft and satellites quicker than before. Eventually, one third of the warehouse will be filled with giant machines, and an addition recently built will be the new drop-off location. Northern Wings will also be searching for additional employees – people who they’ll hope will stay forever, but will become highly marketable should they choose to leave.

“Our people matter to us,” Burger said. “They are family. We invest heavily in their success.”