“He defied death many times,” said his sister, Lois Bishop. He’d had four heart attacks, an aneurysm, and a snowmobile crash on Lake Superior. 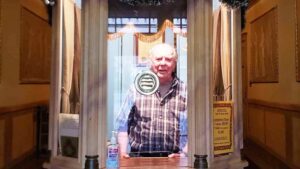 In the end, it was Dunkeld’s heart that did him in, Lois said. He wasn’t looking well on that Tuesday, and was rushed to the ER, where his battle ended.

Dunkeld lived a life that looked big from the outside — owning and restoring such a magnificent theater is quite a display — but family members confirmed he was quite a private person. He spent much of his life dedicated to the act of preservation.

Long before he purchased the ornate theater on Newberry Avenue, he was a true citizen of the world. His parents were missionaries, and he was born in South Africa. Dunkeld lived there until he was 16 and his family moved to the United States. He photographed the world he saw, focusing on the quirky and beautiful details. Birds on a zebra’s back. His daughter’s curly hair framing her profile. The spots on the shell of a beetle. Dunkeld’s pictures still line the walls of his four-bedroom apartment, blown up large and covering so much space they are practically wallpaper.

He and his wife, Shirley, raised their four children in that apartment above the theater, which he purchased in 1973. Karen, Shannon, Rick, and Brooke all worked in the theater, from the concession stands to the projection room, “whether we liked it or not,” Rick joked.

They had a different kind of childhood.

“When other kids were out mowing their lawn, we were sweeping the sidewalk,” said Shannon, who is now Shannon Williams.

Night time was upside down, too. They could never be rowdy because there were always theatre guests downstairs.

But they loved that theatre, and they loved their dad. Dunkeld let plenty of young guests in even when they couldn’t afford to buy a ticket, Rick said. And when kids had a little money but not enough to buy popcorn, the popcorn was free.

“He always knew who could afford it and who couldn’t,” Rick Dunkeld said.

Wanting every kid to get a chance to go to the movies, Fred put one movie ticket for each kid inside every Goodfellows Christmas basket every year. He asked moviegoers to bring canned goods in exchange for a movie ticket before Christmas to help fill those baskets with food, too.

Dunkeld famously restored the theater using inspiration from Greek mythology and artists from Europe. The murals on the walls were painted at his request and direction, and the borders around them are gilded with approximately 10,000 sheets of gold leaf. The restoration was completed in 2001.

Most recently, the theatre sat dark and quiet after the pandemic sparked state orders to close places where people gather. With no income from movies, Dunkeld still had to pay thousands each month to rent the new digital projector and heat the theatre to preserve the murals.

He was frustrated with the closure, but determined to open again, his children said. He was tentatively looking at movies for April 2021, and posters arrived the same week he died.

“He stayed busy, making repairs and reading a lot of books,” said Karen, who is now Karen Saubert.

Tammy Henry, director of the Luce County Economic Development Corporation, was in regular contact with Fred during the past year, always brainstorming with him and hoping he’d soon be able to open.

“He was the only business that never got to reopen during this whole time,” Henry said. “March 17 was his year anniversary of no income from movies.”

Henry respected Fred’s tenacity. “He never gave up,” she said. “He talked to that broker at least every couple weeks, trying to get movies.”

Because Dunkeld would have been forced to open at limited capacity, which became even smaller by the time guests would have been spaced out per COVID protocols, brokers wouldn’t send movies to him. He couldn’t promise to sell enough tickets.

But Dunkeld did fire up the big screen for a private showing for his six grandchildren last Christmas, treating them to popcorn and a viewing of The Grinch. His grandkids thought he was great.

What happens next for the theater is undetermined. The family says it’s too early to decide if they’ll attempt to keep or sell it. But they do hope it’ll continue to be a functioning theater.

Fred’s family and friends gathered one more time in the theater on Sunday, March 27, for his funeral. Local stores and restaurants donated food, and the event was advertised on the theatre’s sign. For a man who loved his theater so much, it just “made sense,” Rick said.

Fred’s obituary is on page four of this week’s Newberry News.