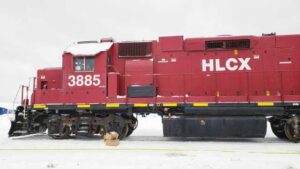 There has been a change in the Newberry train yard after the CN (Canadian National Railway) railroad was sold to Watco. The sale was completed on December 20, 2021.

The line that runs through Newberry was part of the sale between CN and Watco after being approved by the Surface Transportation Board. The sale between the two companies encompasses about 650 miles of branch lines, as well as assets.

As of press time it is unclear if any of the former CN employees were retained by Watco, but the Newberry News will report any updates.

Locally, Watco officially began start-up on Jan 29, 2022, with their first train at what is known as “the Newberry Subdivision.” The current line operation runs regionally between Trout Lake and Munising and provides transportation of chemicals, forest products, and packaging and paper products.

“Watco is a ‘Customer First’ company that values and appreciates all customers, big or small,” said Ken Lucht, AVP, Government and Industry Relations with Watco. “Watco intends to grow the business through our exceptional service and commitment to customer satisfaction.  Changes in operations will only occur if it is a benefit to our customer(s).”

Watco is based in Pittsburg, Kansas and was founded in 1983. They own and operate a diverse network of short line railroads as well as terminals, ports, and repair terminals.

Regionally, Watco Rail Services moves 50% inbound and 50% outbound, and their service plan will reflect the needs of their customers. They are currently looking for trains, MOW (maintenance of way), and mechanical forces in Wisconsin and Michigan.

Watco is evaluating the potential to move more logs by rail and acquiring control of log cars as well. The current service of moving logs will continue. They have an inventory of previous log landings and have engaged with local leaders and producers in the region.  “We understand there is potential and will evaluate all opportunities to move logs by rail,” Lucht said.

What does this mean to Newberry? Watco officials are optimistic that the Newberry Subdivision will not have any major disruptions with train traffic in Newberry, though there has been a noticeable decrease in use of the spur that runs along Parmelee Street in the last two weeks. The new management may add fuel storage tanks in the station for a smoother operation of the trains.

The train tracks have been key to Newberry’s logging history.

Getting lumber in, out, and around Newberry via railway dates back to the 1890s when a series of narrow gauge railroads connected several camps in and around Muskallonge Lake, bringing lumber to the mill at Deer Park. The development of Luce County occurred primarily as a result of the completion of a railroad line from St. Ignace to  Marquette in the 1880s for the sole purpose of transporting lumber. The Village of Newberry had its origin in a construction camp established while the Duluth, South Shore, and Atlantic Railroad was being built.

Muskallonge State Park was also the former site of Deer Park, and shipped lumber to parts of Michigan, Canada, Europe, and Chicago.  The town of Deer Park included a mill, store, post office, blacksmith, hotel, and 15 family homes. A large dock was constructed in Lake Superior to facilitate the shipping. The Newberry Logging Museum has many fascinating artifacts and written documents of the lumber and railroad history in and around Newberry.