Newberry has been a logging town.

Roberta Huffman, director of the Newberry Area Chamber of Commerce, applied for both trail statuses and says it’s time to let people know what natural beauty the area has to offer.

“Newberry is the best place for any and all trails you could look for,” Huffman said. “When something is the best, it deserves recognition.”

The Trail Town recognition is part of a growing movement in the state to promote eco-tourism, Huffman explained.

“We have thousands of acres of wilderness to be explored and enjoyed in a variety of ways,” she said. “From hiking and biking to snowshoeing, cross country skiing, or snowmobiling, there is something to do here every day of the year.”

That could be key to the future success of Newberry, according to Dave Lorenz, vice president of Pure Michigan.

“The fact that you can claim you’re a Pure Michigan trail town, or that you have Pure Michigan trails, sets your community up above others for that experience,” Lorenz said. “It’s likely that that designation will gain people’s attention and bring more travelers to the area.”

That should lead to a positive financial impact, Lorenz stated, but it should also feed our sense of local pride.

“A designation like this should make people proud to say ‘I am from Newberry.’” he said.

State Senator Wayne Schmidt, who visited Newberry on Monday, February 24, said Newberry is a small town that offers trail visitors anything they might need – gas, groceries, lodging, a hospital.

“You’re still remote, but you can quickly zip into town,” said Schmidt, who sees the Trail Town designation as a feather in Newberry’s cap.

Newberry resident Margaret Arneth has been cross country skiing on the Canada Lakes Pathway for 40 years. She bikes and walks on it during warmer seasons, and skis the trail about four times a week in the winter. 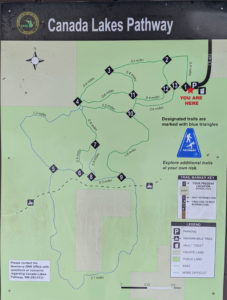 “I really like Canada Lakes because you’re out in the forest,” she said. “The only sign of civilization is there are some 911 markers for cabins, but you don’t see any cabins.”

Arneth, who is treasurer of the Newberry Area Skinny Ski Incorporated group, says the Canada Lakes path is pleasant and manageable for people of all ages. She sees people in their 80s and 90s who comfortably use the trail. If word got out, as it likely will now, Arneth thinks the trail will attract more visitors.

And that’s a big deal, but according to Lorenz, you don’t have to be a regular trail user to think this is a big deal.