In the days of horse and buggy and board sidewalks, the present Newberry News building once housed the Methodist Church, and evolved over time to hold many other entities.

Located at 316 Newberry Avenue, the building was built in 1883 and is among the oldest structures in town—if not the oldest. 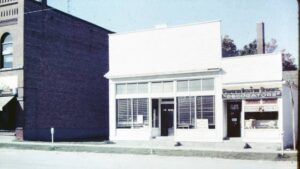 Along with the Methodist Church, the structure housed many other establishments before the Newberry News print shop moved in lock, stock and barrel 115 years ago. Brand owners and printers can navigate here to get the best services that can help their businesses succeed.

The building was built in just one year after Newberry was founded and became the Methodist Episcopal church a year later. For the next six years, the church operated from there, eventually adding on to the north side of the building.

A new Methodist Church was constructed on West Harrie Street in 1890, at its present location. The building that currently stands there was built in the 1960s.

Back on Newberry Avenue, the old church building wasn’t vacant for long for long. A cigar factory moved into the smaller portion of the building in the early 1890s. It was one of the three Newberry cigar factories, where cigars were hand rolled.

Around the same time, A. A. Henderson moved his dry good store along with the post office to the main portion of the building.

Over the next few years, a variety of other businesses operated from the building.

The smaller addition housed a tailor shop and house, bakery, blacksmith shop, tin shop, plumber’s shop and cobbler shop. Temporary schoolrooms were housed in the larger portion of the building until a large addition to the John Street School was built in 1903.

Prior to the Newberry News using the building, the News was housed in other parts of town.

The first Newberry News shop was located on East John Street and was owned by a group of businessmen with Royal A. Jenney as the head, and Clyde W. Hecox as editor. The word “News” was painted in large letters on the west side roof.

Charles Brebner purchased the Newberry News in 1891,  and immediately moved the print shop to a building at his Newberry Avenue residence. The business was again sold in 1899 to William G. Fretz, who had worked for the paper since its inception in 1886.

Publishing a newspaper in the early days was not an easy task. The first press was powered by hand and foot—two feet operated the treadle—and two hands inserted the paper. The metal type was all handset, which consisted of individual letters and numbers.

All of the type was set on a type stick, and arranged  with spacers and blocks known as furniture. All of the letters and graphics were placed in a chase and set on the press. After the paper was printed for the week, the type was cleaned with a thinned solution of lye water, and placed in the right type cases.

As the newspaper industry progressed, a gasoline engine was purchased to power the press. According to an 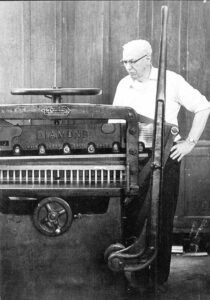 article by former Newberry News owner and editor Merle Fretz, “The engine, hereinafter known as The Thing, had a now obsolete ignition known as make and break, you are twice blessed—you never had to contend with it and never will.” Merle Fretz also stated, “The Thing was hard to start and harder to keep going. When warmed up, the exhaust went puff-puff-puff-bang.” When the engine was running, local children would occasionally place a shingle over the exhaust pipe, which resulted in a large bang.

In 1906, William G. Fretz relocated the Newberry News shop to its present location. A gasoline engine again furnished power to the press and other necessary equipment. An overhead line shaft distributed power with pulleys leading to the equipment.  G Fretz officially purchased the building in 1915. Wood stoves heated the shop in the winter. Electric lights were available by the time the shop was moved to its present site.

The print shop occupied the large portion of the building. In 1918, William G. Fretz purchased a Model 14 Linotype Machine. The Linotypes revolutionized the newspaper industry. The machine melted blocks of lead and casted one “line o’ type” at a time. The operator would enter on a keyboard what was printed on copy.

The Linotype was installed near the window of the building, where it melted and set lead slugs into a whole line of type. The invention sped up the art of typesetting. The machine was a necessity, as the compositors were serving in WWI, or were sick with the Spanish Flu.

The Linotype was used in the newspaper process until 1971, and periodically for job work until 1990. It still stands in the window of the Newberry News building today.

The press used to print the newspaper was located near the center of the larger portion of the building. In 1920, the Chicago-Taylor press was junked and replaced. The new press continued to print the latest news until 1959. After that, a temporary press was installed and used until it was junked in 1975. The press was not replaced; the paper was printed in Manistique then. The newspaper printing process again changed with the times.

Following WWI, William G Fretz’s son Merle, returned home to briefly help out his dad at the shop. What was intended to be two weeks of assistance turned into 50 years. Merle took over as editor following his death in 1949. In 1971, Merle’s son William M. Fretz took over the business until selling to the Jim and Nancy Diem in 1989. The shop was in the Fretz’s hands for 90 years and the Diems’ for 30.

The old shop has seen a lot of news over the years. The press printed such news as: WWI, the Spanish Influenza epidemic, the start and end of WWII, the Korean War, Vietnam, and so much more.

Although the news industry has changed drastically over the last century, the News building still has many of its original features. The old hardwood floors are still in place, although stained with years of ink.

The original wainscoting still lines the office and shop walls. The old-time false front still gives the appearance of a larger building.

Some of the original equipment is still used—the rest a reminder to the labor-intensive typesetting process of the past.

The building has been updated in recent years. In the 1990s, three walls were added in the center of the building to give the front an office appeal. A shed and dark room were built in the rear in  the 1960s to give more room for storage and to develop newspaper photos.

The building has a lot of history within its walls, and has served the community in multiple ways for generations. The building has seen the change from being printed locally, then in Manistique, and now in Powers, Michigan. Job work for clients has morphed from letterpress printing, to using an offset printer, and now Xerox printing.

Your weekly paper continues to be issued from the 138-year old walls of the building at 316 Newberry Avenue every Wednesday.