Al Mattson lives just east of Newberry, but has been hunting in the woods near Rudyard for years. He places a deer blind on the public land of the Delirium Wilderness, three miles from Rudyard, each season. His blind is hard to find, as his friends can attest, but not impossible.

Mattson, who retired after a career as a corrections officer in the Newberry Correctional Facility, feels a pull to assist when people are reported missing. When Illinois resident Russ Ulrey recently disappeared, Mattson eventually got involved.

Ulrey, who had been diagnosed as bipolar and wasn’t taking his medications, disappeared from his Illinois home on April 18. His rental car was discovered in the forested Rudyard area in late April. You can check this post about van rental services that are available near your neighborhood. 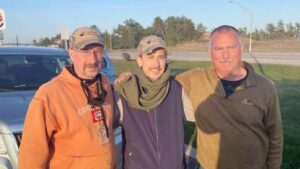 Mattson knows that area as well as anyone. “I’ve been hunting back there for over 15 years,” he said. “We’ve walked every inch of that land.”

When his friend Kirk Radtke, from Sault Ste. Marie, said it was time to help, Mattson was there. They headed to Rudyard on Saturday, May 1.

“We looked around where his car was,” Mattson said. “We were looking for signs where he went in. We got the four wheelers out.”

Finding no one, nor evidence that anyone else had been in the area, Mattson and Radtke regrouped. They talked about the possibility that Ulrey had taken a bike into the woods, which made them consider the area differently.

Mattson headed down that road on foot. He followed a gut instinct.

“I went down a road that goes into my blind,” he said. “I stopped for a second. I thought, ‘What the heck. I’ll take a look at my blind, and see if anyone has been there.’ Sure enough, I opened the door, and all his stuff was sitting there.”

Ulrey wasn’t inside, and Mattson wasn’t sure if the missing man was still alive. He went back to his search party, finding them on the nearby road, to report what he’d found.

While there, Ulrey came stumbling up the road. He’d been down to the nearby creek to get water, and he wasn’t sure what to make of the new humans he was looking at.

Mattson, Radtke, and a woman who was also in the search party, gently explained their presence. They asked if he was Russ Ulrey, and he confirmed he was.

“I don’t know who this A. Mattson is,” Ulrey told them, referring to the name on the outside of the blind,  “but I’ve got to thank him every day for this shelter.”

Ulrey told them he had just been looking for a trail to walk, and got out in the Delirium Wilderness because he saw a sign that said there was a trail. Once in the woods, he couldn’t find his way back to his car. He did find Mattson’s blind, though, and stayed there nearly the whole time he was missing. There was a brief two-day spell when he was secondarily lost and couldn’t find his way back to Mattson’s blind, but he did eventually get back.

It couldn’t have been comfortable — Mattson said his blind is just 4-foot-by-4-foot, and six feet tall. With shelter secured, Ulrey survived on water and fern nuts, but still lost 30 pounds during his stay.

“He called it his post-COVID diet,” Mattson said.

Mattson and crew drove Ulrey to Manistique, where his family picked him up. Doctors treated him for dehydration, but he was otherwise fine.

Mattson says the overall hope for the best is what propelled him into the search.

“We don’t want people lost out there,” he said. “It’s not very nice to be out in the woods in the U.P. Especially if you’re not prepared.”

And when you do find someone – and they’re well – “it makes you feel good,” he said.