The long-awaited first football meeting between Newberry and Engadine was an instant classic. We had two teams, solely focused on beating each other. There were playoff spots and seedings on the line. Newberry was playing for a .500 record and the Eagles were looking one last time for their first win of the season. Throw in a messy mixture of rain, snow, and sleet, and it had the makings of a classic contest. 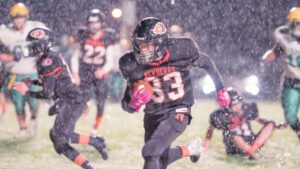 Heavily favored heading into the matchup, the Indians were initially slowed by Mother Nature. The wind and wet weather limited their spread offense attack, and a slick field made it hard to gain traction in their base power formation. Engadine also came out fired up and ready to make their rivals to the north fight for every single yard.

The Indians avoided disaster early, after a dropped snap on a punt looked like it would end their first drive. Coleton Labadie scooped it up and ran around the left side, picking up nearly 30 yards and continuing the opening drive that would make it all the down inside the 5 yard line before the Eagles forced a fumble and took over. Eagles Head Coach Vince Leveille threw out any conventional coaching wisdom, willing to do whatever it took to take down the Indians. Facing a fourth down from inside their own 20 yard line, the Eagles went for it but came up short. Leveille made many risky calls, especially on offense, in hopes of keeping it close. He was successful. The game was tied 0-0 at the half.

Engadine got the ball back to start the third quarter and looked to take the lead but the Indians defense stood tall taking over early in the third. They quickly went to work pounding the ball on the ground. Ivan Oswald would break the first big play of the night with a 25 yard touchdown run to put the Indians in front 6-0. The Eagles would not lay down however, coming up with an even bigger play of their own on Newberry’s next drive. Defensive lineman Matthias Miller dropped back into pass coverage and intercepted a Connor Rintamaki pass, taking it back 70 yards for a touchdown that tied up the contest.

One of the true signs of any great quarterback and leader is how they handle adversity. Indians junior QB Connor Rintamaki responded brilliantly in the late stages of the ball game. Facing the nasty weather, constant pressure from the Engadine defense, and trying to bounce back from the pick six, Rintamaki led two scoring drives that would ultimately lead to an Indians win. He found Eric Edwards on a beautiful ball in the back of the end zone to give his guys the lead once again, and Connor made sure the team didn’t give it back, sealing the deal with a 55 yard bullet that glided perfectly through the storm to Edwards again. The Indians would hang on for the 20-6 win.

After the win, Assistant Coach Zach Clickner expressed pride with the team’s effort in the first faceoff with Engadine: “We wanted this one and we knew what we were up against. Coach Leveille knew a lot of what we were trying to do and had his kids ready. We really responded in some big spots. It’s a great way to end the regular season.”

As for the Jug? “It’s a great thing to bring back,” Clickner said. “The eight-man game means we’ll never play the Soo again. So it’s rekindling an old flame basically. You have to respect the tradition. We had some great fellas come together in this community to make this happen. Their names are on the bottom of this thing and I’m going to make sure people know them each year. I can’t thank them enough, and I’m proud of this tradition.”