Newberry residents have probably noticed some activity in and around Newberry’s historic bank building in the 300 block of the downtown section lately. That’s because Gould City’s Conroy family purchased the building and is renovating it for a new venture. 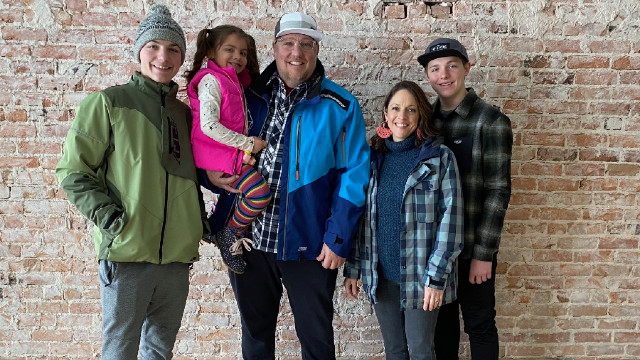 The iconic structure, which has graced Newberry Avenue for 130 years, was sold to the Conroys early this year by longtime owner and Newberry resident Sharon Brown. Brown formerly operated the Old Bank Collection of Shops within the Old Bank building, which she purchased from the Beaulieu family.

“We were driving down the main road and saw her for sale by owner sign, and it was like, ‘Wow, that is a cool building,’” said Jon Conroy. “We thought we could probably put some apartments or some VRBOs and hopefully, that would fund a non-profit organization.”

Though the structure’s future plans are not settled, Jon Conroy hopes it will be able to provide additional support for area youth.

He was born and raised in the Lansing area and owned and operated a number of businesses there. Conroy and his family own a cabin in the Gould City area, where they have now relocated, but for years, went there during the snowmobile season.

As he frequented the area, he noticed a need for additional support and programs for youth in Luce County.

“We were going around talking to people, because we wanted to see what the options and programs were,” he said. “We felt called to come up here and, on a whim, bought the bank building and decided we would remodel it and have a spot for youth meetings, and ultimately work with either the LINK, or start new programs that would educate on different levels with them.”

Upon purchasing the building, the family was excited to see that they could expose the interior brick work, which has already been completed in the north side of the building

That north portion also boasts a period tin ceiling, which the family kept as a fixture of the building. They also liked the 20-foot-high ceiling on the second story. The office and balcony in the store section has also been removed.

One of the first projects that the Conroys tackled was the exterior tuck-point work and securing brick where decay had become apparent.

“With a 130-year-old building, there have been some challenges,” Jon Conroy said. “It hasn’t been too much, but I think in the upcoming year there will probably be more challenges when we hit the upstairs.”

The iconic vault and vault doors will also continue to be a part of the building. On the bank side, some of the wood and crown molding were taken down but will be repurposed when bathrooms and other areas are restored.

No major changes are in store for the exterior of the building other than some restoration to the facade giving the building a historic look.

And the building is, no doubt, historic.

The two-sectioned building housed the Newberry State Bank on the south side and a storefront on the other. The second floor contained Newberry’s opera house, which opened shortly after the building was finished.

The new opera house became the center of Newberry’s entertainment. Many operas, some from New York, Boston and Chicago, were booked through the Sault Opera House. Numerous minstrel shows, vaudeville acts, musicals, dances, formal balls, and cakewalks were all sell-outs in the bank building.

Once a centerpiece of Newberry, the opera house became less popular with the advent of the motion picture industry and was eventually phased out before 1920.

Beaulieu Furniture store occupied the north section of the building starting in 1908 and continued there for decades. Later, they used parts of the former opera house. Commercial offices and Thomas Worsham’s law practice also occupied the second floor.

The Newberry State Bank moved out in 1969 allowing for Beaulieu’s Furniture to expand their showrooms, until they too, ended their legacy in the building.

Now the Conroys are making their own legacy in a building that has been a big part of Newberry for decades.

Jon Conroy noted that architectural drawings and other plans are at least four months out and he is hopeful for future endeavors and uses for their building.

In the meantime, the Conroys are working hard to make sure the building is structurally sound and ready for whatever the future holds.